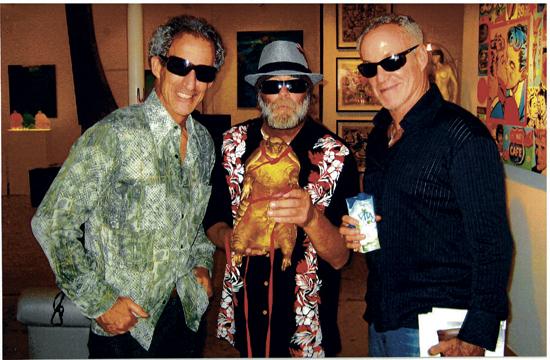 Eight months ago, homeless street artist Gary John was up to his usual one day – painting for nearly 10 hours non-stop on the Venice boardwalk – when something told him to put his brush down, pack his things, and check out Culver City’s art gallery loop.

“I never stop painting,” John says. “I don’t break my routine and more than that, I hem and haw for everything.”

But on that day, John listened to what he describes as nothing more than “divine intervention.”

During this journey to Culver City, he walked into the Bruce Lurie Gallery near the corner of La Cienega and Washington boulevards.

Perhaps it was the dried-up paint on John that tipped gallery owner Bruce Lurie off, or maybe the same “something” that spoke to John hours earlier, whatever it was compelled Lurie to address him, knowingly, when he said, “Hi artist.”

The salutation did not strike John as particularly significant. He walked about the gallery before heading toward the exit when he heard a voice behind him.

“What kind of art do you do?” John recalls being asked.

He told Lurie about his art – his abstract pop culture images on cardboard, newspaper, canvas, and just about any low-cost material he could get his hands on.

For years John met several people, celebrities included, who filled his ears and heart with colorful hopes. They promised to help him find representation and to get his work on t-shirts, skateboards, and other commercial exposure – which never happened.

When Lurie expressed curiosity and asked him to bring his work in, John assumed the usual would transpire: He’d bring his things in, lay them out, be told his work wasn’t actually what they were looking for and sent on his way, with good wishes, of course.

However, this time was different. The decision was unanimous. All three Lurie brothers – Bruce, Evan, and Scot, all gallery owners themselves, happened to be in town that day – decided John was precisely who they were looking for.

“They said come back tomorrow and we’ll do some paperwork,” John says. “I think he took everything I had. It was like a dream. They were telling me my stuff is fantastic, we’re going to promote you, not only that, represent you and take you all over the country and it was too much.”

Overwhelmed nearly to hysteria, John asked them to stop talking, said it was too much for one day and left. He walked halfway down the block, found a front porch and sat. He recalls bawling like a baby but more like someone whose wildest dreams had just come true.

Nearly a decade ago, John visited Los Angeles to seek a brighter backdrop than the grey and rain from his native Seattle. At the insistence of his friend Dan Corley, he said he visited LA for what he intended to be a two-week trial.

“I owe everything to Dan Corley,” John says. “He encouraged me when I wanted to give up. If it weren’t for him I would not be where I am today. No one could ask for a better friend.”

When he arrived, he says, he knew LA would be his new home. The sole earnings from his art sales on the boardwalk sustained him to a minor degree. John struggled with homelessness, finding himself in and out of motels and living on the streets of Venice.

“I was able to pull myself in and out,” John says. “After 10 years of gutting it out on Venice Beach, I had all but given up. Things really improved when Bruce took me on.”

Today, John lives in an apartment in Culver City.

His art is reminiscent of Haring and Basquiat, and it’s with comparable abandon that vivid hues take shape (or not) on his canvas.

John says he’ll never forget the first time he saw his paintings on the wall.

“It was beautiful,” he says from under a dark green baseball cap and sunglasses, his hands tucked deep into his pockets. “Here were my paintings on this beautiful wall and Bruce came up to me and said, you’re where you belong – he said that to me.”

John himself won’t be at Art Basel Miami Beach 2013 next month, but his art will. The highly selective annual international show attracted 50,000 international visitors last year. Artists, collectors, gallerists, curators, art enthusiasts, and the like descend on Miami Beach for four days to celebrate work from masters of Modern and contemporary art as well as pieces by emerging stars.

Art Basel is not John’s first show appearance, but it is the most high profile. His acceptance to the show is something not many established artists can’t boast. Past show appearances include the Affordable Art Fair in New York, Houston Art Fair, as well as shows in the Hamptons and Palm Springs.

In the past few weeks John’s work appeared in an auction hosted by The Skirball Museum; Children’s Hospital Los Angeles recently purchased a few of his works; and a curator from the Gothenburg Museum of Art in Sweden expressed interest in showing his work.

John wants his story to serve as encouragement for artists who remain steadfast as well as for those who struggle with persevering through the odds.

“If you hang in there long enough, you keep pushing, your dreams can come true. I never believed it because I went through so many hardships,” John says.

Even though his art is receiving attention he never thought possible, John still paints and sells 8×10 inch pieces along the Venice boardwalk.

Visit Gary John’s website at streetartgaryjohn.com. Alternatively, you can find him in person most days along the Venice boardwalk across from Figtree’s Café.