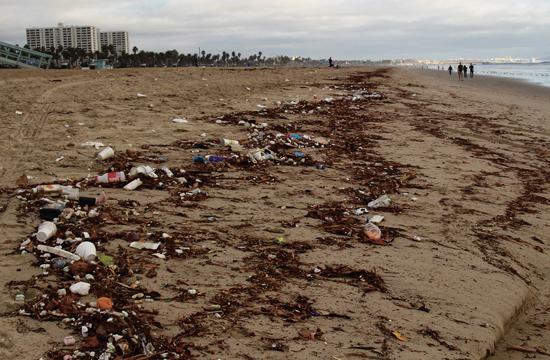 They say it never rains in Southern California. Of course, it actually does rain here. When it does, the rain might be good news to the skies above Santa Monica. Yet the wet weather was bad news to Santa Monica Beach last weekend.

Benjamin Kay, the Samohi teacher and SMC instructor who documented the plastic pollution at the beach after the “second flush,” posted the video on YouTube after the Nov. 21 rain.

The video was taken just above Pico Kenter Storm Drain, located at the end of Pico Boulevard and near Shutters on the Beach.

In a phone conversation with Kay, he told The Mirror it was the worst “second flush” pollution he had ever seen.

A “flush” is when, after a rainy day or rainstorm, water rapidly moves toward the ocean from various communities and then underground through the storm drains and toward, for example, the ocean.Along the way, the fastmoving water collects any litter not deposited into a trashcan or similar contraption.

When the flush finally reaches its end point, whatever litter picked up along the way accumulates and creates quite the mess.

In the case of Pico Kenter, litter picked up and accumulated throughout the entire network connected to the Santa Monica-based storm drain would empty either on the beach or make its way a few more feet into the ocean.

Kay told The Mirror flushes sometimes create a pathway in the sand, essentially connecting Pico Kenter to the ocean.

Last week, Kay said the water within the newly created “pathway” was “like a raging river” after the Nov. 21 rain.

Inside the pathway, the fast-moving water included “tons of plastics,” Kay said. “As far as you could walk, there was plastic everywhere. Sometimes we get a massive amount of water and the trash can be washed away, other times it sets in pools.”

According to Kay, the “first flush”of the fall rains arrived in October. At that time, the flush only resulted in a “pool,” with less trash and water than the recent “second flush” when the “raging river” occurred.

Kay, who teaches biology at Samohi and SMC, did point out the City of Santa Monica is doing its part in attempting to reduce the amount of single-use plastic in the environment.

He commended City Hall for instituting a single-use plastic bag ban, for example.

Still, he added the underground storm drains are connected to other parts of Los Angeles, where Styrofoam and single-use plastic are still used.

When such items are not properly disposed or stray from trash or recycle bins, they often end up in storm drains and move toward places like Pico Kenter during rainstorms.

Kay’s YouTube video was more than four minutes in length. In the video, Kay, who is also a marine biology instructor at SMC, documented the amount of single-use plastic that made its way to the ocean and, as he stated, “that’s not going to get cleaned up.”

“Most of California is a very dry state, so when it finally starts to rain the pollution built up over the dry months – whether plastic bags, bottles, or toxins – washes from inland streets to storm drains and rivers, then out to the ocean,” Monroe wrote. “The first rain of the season in early November was fairly light, so the massive flow of waste didn’t make its way to the ocean until this week’s major downpour.”