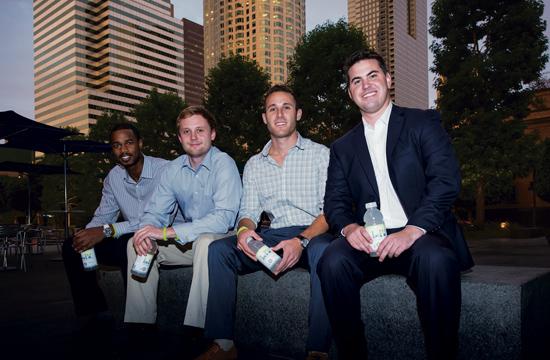 What’s the key to reducing the agony of a hangover? Three Santa Monica entrepreneurs believe they have found the answer: oral rehydration therapy.

The founders – Cameron Killeen, Hayden Fulstone, Brandin Cohen – say it contains an optimal combination of glucose, electrolytes, and water to rehydrate the body at a rate similar to an IV.

Killeen said the drink was inspired after a work trip to Las Vegas for his previous career in finance in 2012.

“One morning after a long night, I went into one of my coworker’s hotel rooms and I noticed him drinking this strange orange liquid in this big square bottle that I had never seen before,” Killeen said. “I asked him what he was doing. He said, ‘well I’ve always got the most debilitating hangovers, and about six months ago I read about this stuff on the internet called Pedialyte and it’s a baby drink, but when you drink it after drinking the next morning, it makes you feel a lot better.’ I was a little weirded out, but thought it was interesting.”

On his return to Santa Monica, he and his roommate Fulstone decided to test out Pedialyte themselves.

“We went out, had some drinks, and tried it the next morning,” he said. “We did and it worked well. We were excited and started to spread this discovery around our social networks in LA.”

Meanwhile, Cohen had started a new job working for the Arizona Diamondbacks baseball team in 2010 and had a similar experience learning about Pedialyte.

“I was bonding with some of the guys from the team before the game in the locker rooms, and they were all drinking this weird drink that I had never seen before,” Cohen said. “I asked one of my good friends, who happened to be the third baseman for the Diamondbacks at the time, and said ‘hey what is this stuff you are drinking? He said ‘it’s Pedialyte – it’s this baby drink, I don’t really know why we drink it, but the trainers tell us to drink it because it’s really rehydrating and it’s great when you are out in the desert for cramping and good for jetlag when traveling. He told me that all the good players were drinking it, so he started drinking it too.”

When Cohen moved back to Los Angeles in 2012, he was living on the couch in an apartment near Montana and 5th rented by Killeen and Fulstone.

The idea for Liquid I.V. was born after they all spoke about the phenomenon of Pedialyte.

“We thought, let’s see what’s working so well about this drink and instead of having people go buy a baby drink, why don’t we create something that’s marketed for adults,” Fulstone said. “That’s where the whole idea started.”

Fulstone said the first step they took was finding out what worked with Pedialyte.

“We decided to take what’s good about the ingredients and improve upon it and make it a lot better,” Fulstone said. “What works is called oral rehydration therapy. It’s an optimal combination of glucose, electrolytes, and water to rehydrate your body as a rate similar to an I.V. What we did was take that ratio and added a number of vitamins such as vitamin B and vitamin C, and also on top of that took things out of Pedialyte that weren’t healthy – artificial sweeteners, preservatives, and artificial coloring. We wanted to create a drink that was 100 percent all natural.”

Cohen said they found a beverage chemist to work with to formulate the drink.

“We met with him regularly to test different ingredients and different flavors and went back and forth through a number of rounds of different testing,” Cohen said. “We found out that there were so many deficiencies that we wanted to improve upon when we looked into Pedialyte.”

Killeen said their initial idea was to cater to the hangover market – college students and young professionals – but they saw an opportunity to expand into the sports beverage market as well.

“As we started exploring it further, we found there was a void out there in the market for a premium rehydration product, unlike Gatorade which is loaded with sugar and calories, that has a lot more electrolytes and is a lot healthier for you,” Killeen said. “We decided to split our idea into two distinct products: Liquid I.V. Sport that’s geared towards recovery from athletics, jet lag, sickness and then our Liquid I.V. Hangover recovery formula which is specifically formulated for how you feel the next day after drinking alcohol and to help you to recover from that.”

The bottled hangover and sport versions of Liquid I.V. are available for $3.49 at select convenience stores, gas stations, gyms, and liquor stores in Santa Monica and the south bay. The product is also available in the form of powder packets that can be poured into cold water and make the exact same drink as the bottles. Most people prefer the convenience of the Liquid I.V. monthly supply package, which costs $19.99 per month and includes eight packets that are delivered anywhere in the U.S., free shipping and handling. As part of this special offer, if you order the monthly supply and use promo code SantaMonica you will receive 50 percent off your first month.