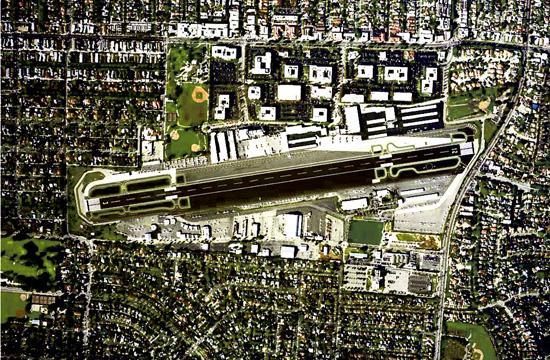 The regulated airspace surrounding Santa Monica Airport (SMO) is set to expand Dec. 12 in order to accommodate aircraft arriving at and departing from the facility, according to the Office of the Federal Register.

Referred to as “Class D airspace,” the federal authorities amended Title 14 of the Code of Federal Regulations to expand the regulated area above and around SMO from a four-mile radius to 4.6 miles northeast of the airport.

A search of the Instrument Flight Procedures (IFR) Production Plan for SMO on the Federal Aviation Administration (FAA) website shows seven actions are in the works for the airport through July 2014, including the Dec. 13 airspace expansion.

The amendment was discussed at Monday’s Airport Commission meeting after a Sunset Park resident anonymously sent an email to the council members and the city manager alleging the FAA action would result in a “huge increate of jet traffic” at SMO.

“The current Class D is fine for small planes but is being expanded to handle many more jets, and possibly larger ones,” the anonymous email stated. “This will make Sunset Park utterly unlivable and completely destroy the value of our homes. This is not a rumor.”

In the email, the anonymous writer claims if all seven actions listed on the FAA’s IFR Production Plan are executed, it would result in a “deluge” of large jets at SMO.

“These changes are so major that it appears that the FAA is planning to accommodate hundreds of jets per day,” the email stated.

However, the FAA said expanding the Class D airspace radius has no relation to the level of traffic at SMO or any other airport.

“Increasing the size of the Class D airspace has no bearing whatsoever on the type of aircraft they can use the airport,” Allen Kenitzer, the FAA’s manager of communications and media relations, told The Mirror. “Expanding the Class D will better protect all aircraft arriving at and departing from SMO and transiting through the airspace around it.”

According to the FAA, however, the airspace amendment was necessary for SMO to remain “operationally current.”

The Federal Register noted: “This airspace action is not expected to cause any potentially significant environmental impacts, and no extraordinary circumstances exist that warrant preparation of an environmental assessment.”

According to the FAA, Class D airspace must be sized to “allow for safe and efficient handling of operations.”

A Class D airspace designation is generally reserved for small airports with an operating air traffic control tower, such as SMO.

Most commercial airports are either Class B or Class C airspace. LAX, for example, is Class B while Sacramento International Airport is Class C.

Detailed information of the Class D amendment can be found at federalregister.gov/a/2013-21497.