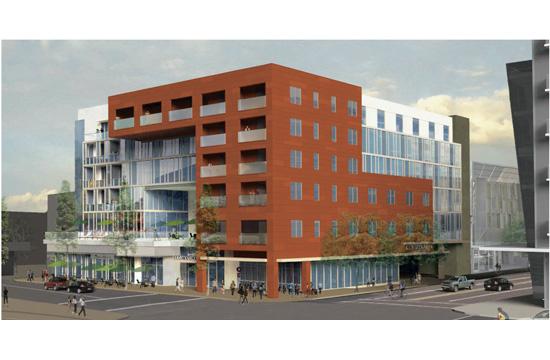 Light rail stations and hotels are not an uncommon partnership. In neighboring Los Angeles, a few of Metro’s rail lines have stops adjacent to hotels such as The W in Hollywood and The Standard in downtown Los Angeles. In Santa Monica, two hotels will soon be located across from the Expo Line terminus as council members unanimously approved Tuesday the development of a Courtyard by Marriott and Hampton Inn by Hilton.

Both hotels will be located near the intersection of Fifth and Colorado – just one block east of the Expo Line’s terminus station. Also within walking distance of both hotels would be the Civic Center, Third Street Promenade, Ken Genser Park, Tongva Park, and the Santa Monica Pier.

Hampton Inn and Suites will be located at 501 Colorado and will feature 143 guest rooms.

The other hotel, Courtyard by Marriott, will be located at 1554 Fifth Street and include 136 rooms.

Each hotel will be six stories in height, 75 feet tall, and include two subterranean levels for up to 108 parking spots, respectively.

The City Council’s approval of the two separate development agreements (DA) came on the heels of OTO Development coming to terms with the union Unite Here Local 11 to pay workers at least $15.37 per hour. Accordingly, each property will be a union hotel.

City staff had recommended a minimum wage of $14.08 per hour.

Other community benefits include the hotels providing space for bike sharing and a local hiring provision.

The developer must also contribute about $600,000 toward the Colorado Esplanade, achieve LEED Gold certification for the project, create a Transportation Demand Management program aimed at reducing parking demand and vehicular trips in the area, install solar energy systems, and adopt water conservation measures.

With the close proximity of both proposed hotels to the Expo Line terminus station, City staff predicted it would be easier for people working at or visiting either the Hampton Inn or Courtyard by Marriott to access points due east.

City staff added both hotels would be a “priority project” since they would be revenue generating.

In addition to 52 jobs created by the development, City staff stated both hotels combined would yield $2.74 million annually for Santa Monica.

At the Nov. 12 council meeting, council members seemed satisfied with the progress OTO Development made in adjusting the project – including reaching an agreement with the union.

Now, the final hurdle OTO Development must clear is obtaining input from the Architectural Review Board (ARB).