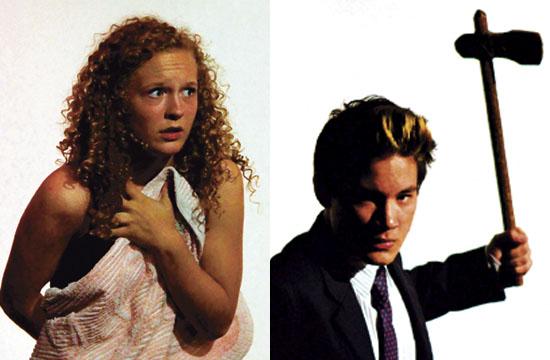 Santa Monica High School students are so excited about their upcoming production of “Noises Off” that they are putting on a special performance for Alums tonight at 7 pm.

This hilarious comedy is the quintessential theater insider’s play, with its backstage backstabbing, wardrobe malfunctions, and high-speed hi-jinx.

Samohi Drama Club president Glenn Morizio, who plays Garry/Roger, said “Noises Off” is about a total epic fail of a show.

“The audience gets to laugh at all the puffed up egos and incompetence of the cast and crew putting it on,” Morizio said.

The abundance of inside jokes for theater people made “Noises Off” a natural choice for Samohi Theatre’s first annual Alumni Night.

Director Kate Soller said the students were really proud to be a part of such a rich theater history.

“They really want to honor the talented people that came before them,” Soller said. “They like the idea of getting to meet people who, just like them, in that very space, were memorizing lines, getting blocking down, and getting nervous before the show. An Alumni Night is a great way to do that.”

Parents are getting involved as well. Vincent Landay, a Samohi Theater Alum and Samohi parent, formed a private Facebook group for Samohi Theater Alums, where they are posting pictures and sharing stories of their glory days on the main stage of Barnum Hall.

“While there are many famous Samohi Theater Alums, such as Robert Downey, Jr., Sean Penn, Rob Lowe, Carson Daly and many more,” Soller said, “we’d like to celebrate everyone who went through this program and made it great.”