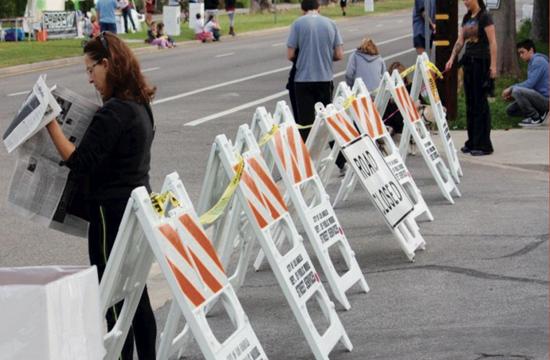 Eight may have been more than enough, six is halfway to a dozen, five is a party, and three is a crowd. For Santa Monica’s city leaders, three is crowd enough for the number of races to be allowed within city borders.

The Santa Monica City Council voted last week to restrict how many 5K and 10K races would be allowed in Santa Monica. From now on, only three such races would take place in the City each year.

Prior to the council’s vote Oct. 22, City law allowed for as many as eight 5K or 10K races to be held in Santa Monica. According to City staff, residents along race routes began experiencing ‘race fatigue’ due to the increased number race events over the past several years.

In the past five fiscal years, the number of 5K and 10K races in Santa Monica increased from two per year to five per year. Adding to the list of races are the Los Angeles Marathon and Santa Monica/Venice Christmas Run.

“Occasionally staff receives complaints regarding the use of amplified sound at the start of races but mainly the complaints are related to the frequency of races and the parking and access limitations for residents,” City staff stated.

City staff acknowledged at the council meeting the reduction in annual races within Santa Monica was spawned by the inconveniences each 5K or 10K brought to residents who lived closest to the race routes.

Council member Bob Holbrook vocalized the inconveniences of the race routes to residents who live along San Vicente Boulevard.

“Do you realize the burden of being cut off from the City for several hours?” Holbrook rhetorically asked City staff.

Holbrook continued, describing the many out-of-the-way alternate routes those north of San Vicente Boulevard may have to take to get home whenever a 5K, 10K, or other race comes to town.

“When we run one of these races, anyone who lives on the north side of San Vicente cannot get to Santa Monica,” he said. “We have to go to Los Angeles, drive down the Pacific Coast Highway or drive Sunset Boulevard to 26th Street, or get on Pacific Coast Highway and come up through the tunnel on the freeway.”

Council member Gleam Davis suggested one race be held in May and the other two be held between September and November with a seven-week gap between each.

If the ordinance clears second reading, City staff will return to the dais with an update in about one year to provide an update of the program’s progress.

Race organizers have some restrictions to heed under the ordinance, such as sending notices to residents and businesses within a 750-foot radius of the race route. Other elements race organizers must adhere to include using Santa Monica Alerts and the City’s Facebook page to announce street closures, submit an advertisement in a local newspaper within two weeks of the event, and use electronic message boards as part of a Traffic Management Plan.

According to City staff, in nearby Beverly Hills the only race permitted to occur within its city limits is a portion of the Los Angeles Marathon. Only one 5K or 10K race is allowed annually within Culver City’s borders while between three and five races are permitted each year in Hermosa Beach and Manhattan Beach, City staff noted.