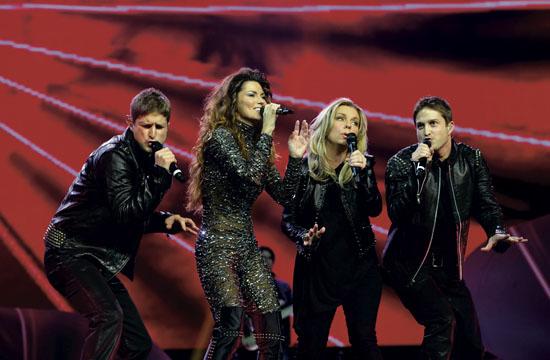 Shania Twain shows she’s still the one as she returns to live performances for the first time in almost a decade at The Colosseum at Caesars Palace Las Vegas. She is currently half way through her two-year residency that began Dec. 1, 2012.

The Las Vegas shows are her first public performances since her “Up!” tour ended in 2004.

The concert, “Shania: Still The One,” takes fans on a journey through the various stages of her life and career in a 90-minute show filled with music, multi-sensory experiences, fashion, and a few unexpected surprises.

The show is designed to give audiences an intimate, only in Las Vegas concert experience – with no fan more than 120 feet from the stage.

The high-tech production incorporates some unexpected surprises including multi-scent show projectors, a new 4D multisensory technology that has never been used before in a concert setting.

The show opens with the background screen showing Shania riding a horse through the desert, which revs into a motorcycle moments before she enters on a suspended flying motorcycle. She opens with the song “Let’s Go” while leaning left and right to correspond with a fast moving bike track on the screen behind her.

Once lowered, her 13-piece band and four male dancers join her on three islands that glide  onto the stage.

Elements of many of her music videos are incorporated onto the background screen during the show. In her second song of the show, “You Win My Love,” there are purple and white squares and cubes extracted from her music video set at a racetrack where Twain drives around in a race car in a skin-tight leather outfit (the video is based on the lyrics to the song which are vehicle-related).

A water background spiraling out of control is projected on the screen for her next song as nine violinists appear for “Don’t Be Stupid.” A HD camera in the audience captures her dancing and singing around the stage, which is then projected onto the background screen.

“I like the background because I get to see my butt,” she jokes after the song. “It’s like my mirror!”

Throughout the show she speaks with the audience, always so humble each time.

“I’m so grateful to be here as part of the 10th anniversary of the Colosseum,” she says.

She talks about how she is honored to take the same stage that is regularly graced by music superstars Celine Dion, Rod Stewart, and Elton John.

She segues into her next song by telling fans there’s no way but up as she breaks into her 2002 hit “Up!” – the title song of her fourth studio album.

To acknowledge the three different music videos created for this song (red, green, and blue), the background screen changes color from red, to blue, to green – each time corresponding colored confetti falling from the roof onto the audience.

The mood changes as an animation of a desert then appears and a country town set rolls on stage, with Shania entering on a black horse.

“He drinks, he smokes, he’ll cuss, he swears, he tells bad jokes,” she begins to sing from the song “I Ain’t No Quitter” – all while the four dancers take turns picking her up and swinging her around the stage.

“That’s one way to get a head rush,” she jokes after the song, “four hunky guys swirling you around.”

She takes a quick break from singing to talk about her songwriting idols Dolly Parton and Willie Nelson, among others.

She recalls the first song she wrote aged 10 called “Mom and her wine.”

“Sing it for us!” a fan yells from the audience. “Not tonight,” she politely responds before briefly explaining her true love of country music.

“I learned how to tell stories through the old style of country music,” she says.

Anyone in the front half of the auditorium gets to see her genuine smile up close as she walks through the aisles shaking hands while singing “Whose Bed Have Your Boots Been Under?”

A couple of even luckier audience members took the up close chance with Shania to pose for quick photos with her before she makes her way off stage for a costume change.

While the audience waits for Shania’s return, the crowd begins to murmur as a huge leopard appears on the background screen. As the last roof of the country town set disappears beneath the stage, the background screen turns to hills covered in leopard patterns. Then all of a sudden, Shania runs back on stage for her hit “That Don’t Impress Me Much” dressed in a hooded leopard skin outfit, similar to the one seen in her 1998 music video for the song that was filmed in Barstow and the Mojave Desert.

The audience interaction continues as she moves onto “Honey I’m Home.” She walks down to the second row of the audience and hand picks a fan to sing the song with.

Toward the end of the song, a large red door is lowered from above stage, which she walks through to end the song and to make another costume change.

The time is passed with snippets of old music videos flashed up on the background screen.

She returns to the stage alone, inviting out two of her backup singers – identical twins Ryan and Dan Kowarsky – to perform her mother’s favorite song called “Carrie Ann.”

Shania then welcomes a handful of fans (who she says are picked by her husband each show) on stage to join her around a campfire set to share where they are from and what they are doing on the Las Vegas strip.

“What brings you to Las Vegas?” Shania asks one female fan pulled up on stage, “You!” the excited fan responds before telling Shania she had traveled from Texas just for the show.

After a few minutes of friendly banter, Shania talks about the importance of family and her charity called the Shania Kids Can Foundation. She then sings two songs (“Come On Over” and “Rock This Country”) around the campfire with the group of her new “family.”

After the fans return to their seats, the camp fire set disappears and a forest setting appears on the background screen. A black horse enters into the jungle surrounded by fire, then magically turns from black to white.

Shania rides out to center stage on a white horse, singing another two of her biggest hits back-to-back:  “Still The One” and “From This Moment.”

Shania leaves the stage for one final time, returning to conclude the show with arguably her most popular song, “Man! I Feel Like A Woman!”

Her four dancers run onto the stage from different aisles and sparking large silver letters spelling “Shania” are lowered from above stage. A red cloud storm erupts on the background screen and the audience reacts with utmost delight as she belts out the lyrics, with fans rising from their seats to sing and dance the final minutes of the show away.

For more information or reservations, call 800.745.3000 or visit caesarspalace.com.