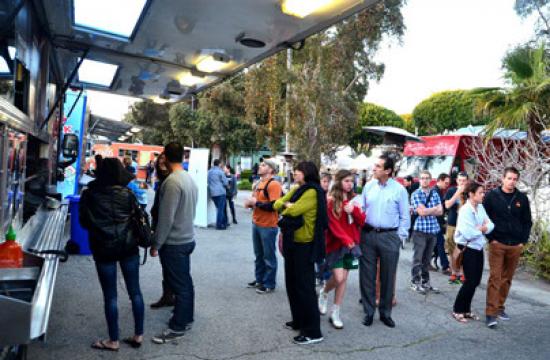 Move over Taco Tuesdays. Food Truck Tuesdays at the California Heritage Museum are here to stay for another three years, thanks to a Santa Monica City Council vote Tuesday night.

Council members approved the food trucks to remain at California Heritage Museum at 2612 Main Street for a three-year term after a survey indicated the mobile restaurants had a “minimal impact on Main Street businesses.”

The survey was conducted amongst Main Street businesses and food truck patrons to assess the potential impacts of the Tuesday night food truck event at the California Heritage Museum on area businesses.

According to City staff, 112 food truck patrons, 65 Main Street patrons, and 59 Main Street businesses completed the survey, which was conducted in January, April, and May this year.

The survey revealed 59 percent of those who patronized food trucks resided within Santa Monica. About 56 percent of food truck patrons did not drive to California Heritage Museum to satisfy their respective Tuesday night hunger.

• About 31 percent of Main Street patrons believed Tuesday nights were busier than other days;

• 38 percent believed it was more difficult to park on Tuesday nights;

• Of the businesses surveyed, 90 percent indicated hours of operation did not change on Tuesday nights in the last two years;

• 61 percent of the restaurants and 46 percent of the Main Street businesses stated their respective customers had difficulty finding parking on Tuesday nights;

• Tuesday night food trucks were not in direct competition with 78 percent of Main Street businesses;

• However, only 56 percent of Main Street restaurants surveyed stated the Tuesday night food truck event “was not in direct competition with their business and noted no noticeable changes in sales;”

• 66 percent of Main Street businesses “were interested in collaborative marketing and promotional opportunities with the Tuesday night food truck event.”

The food trucks were allowed to fill the parking lots of the California Heritage Museum after the City Council authorized a Temporary Use Permit (TUP) in September 2010.

Up to 10 food trucks were allowed to participate in the weekly event. Each Tuesday night, between 5:30 pm and 9:30 pm, patrons took advantage of a variety of cuisines offered by multiple mobile restaurants.

The food vendors paid the California Heritage Museum a fee for use of its parking facilities.

According to City staff, between 400 and 500 patrons visited the food trucks each Tuesday, ranging from local residents, tourists, and those living nearby.

As part of the council vote, once a food truck vendor completes its three-year term, it would be eligible to reapply for another permit.

Smash burgers done right at Tripp Burgers By Kerry Slater Surrounded by a collection of strip malls, a Westside pop-up...