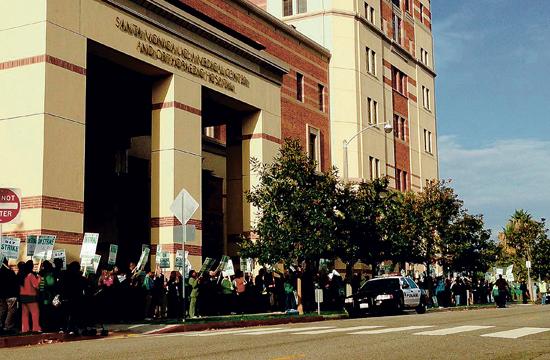 For the second time in almost six months, some workers from the Santa Monica-UCLA Medical Center participated in a one-day strike last week.

The Nov. 20 strike, coordinated by the American Federation of State, County, and Municipal Employees (AFSCME) Local 3299, took place at each of the University of California hospitals statewide, including the UCLA-run facilities both in Santa Monica and in Westwood.

All hospitals remained open, with elective surgeries directly impacted by the one-day walkout, according to news reports.

Similar to the two-day strike at Santa Monica-UCLA Medical Center and other University of California hospitals in May, elective surgeries scheduled for Nov. 20 were reportedly rescheduled.

Union officials and the workers participating in the strike made demands for increased staffing, pay raises, and updated pension plans.

According to a statement released by UCLA Health, 325 replacement workers filled in for those who joined the picket line. Some administration staff members were “redeployed” to substitute for a variety of workers ranging from housekeeping staff to respiratory therapists and nursing assistants, according to UCLA Health.

“We sincerely apologize for any inconvenience this strike may cause our patients and their families and friends,” UCLA Hospital System’s chief medical officer Dr. Tom Rosenthal said in a released statement prior to the strike. “However, every effort is being made to ensure that the hospitals and clinics that are part of the UCLA Health System remain open and continue to deliver the highest level of patient care.”

In all, 20 percent of elected surgeries scheduled during the one-day strike were rescheduled.

It was estimated the one-day strike would cost the entire UCLA Health System $2.5 million, including lost revenue and compensation for replacement workers.

AFSCME represents about 22,000 patient care and service employees. About 3,800 of those employees work for the UCLA Health System.

Despite the strike, UCLA Health said approximately 75 percent of AFSCME employees still showed up for work.

Also on the picket line alongside AFSCME Local 3299 members were representatives of other unions representing teaching assistants, lecturers, librarians, nurses, and healthcare and research employees at the University of California.

A similar strike took place May 21 and 22, when nearly 30,000 people participated in a two-day strike at University of California hospitals across the state. Members of the second labor union, University Professional and Technical Employees (UPTE), joined the two-day strike in solidarity.

At Santa Monica-UCLA Medical Center, more than 100 hospital employees lined Wilshire Boulevard and 16th Street during the two-day strike last May in an effort to increase staffing, update pension plans, and demand raises.

In September, AFSCME Local 3299 filed a complaint with the California Public Employment Relations Board (PERB) and alleged representatives on behalf of the Regents of the University of California engaged in intimidation practices against hospital workers during the two-day strike in May.

Specifically, the complaint charged the Regents of the University of California with threatening “adverse action against employees for participating in a strike,” listing three scenarios where a UC representative allegedly singled out an employee to be terminated or reprimanded if they took part in the two-day walkout in May.

The Santa Monica-UCLA Medical Center is a 267-bed facility located at 16th Street and Wilshire Boulevard.