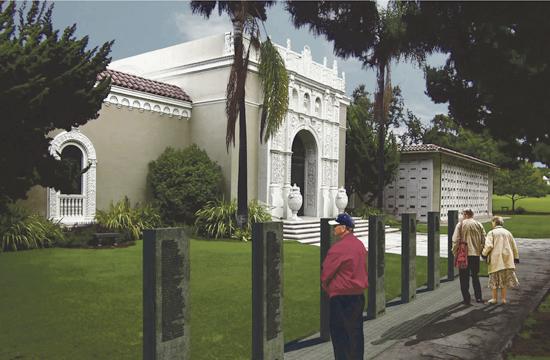 Veteran’s Day might be commemorated once every November, yet those who served in the military can be honored daily. The Santa Monica City Council will be considering on Tuesday a plan to bring a War Memorial to Woodlawn Cemetery to honor local natives who gave their lives to defend the United States in battle since the late nineteenth century.

A public fundraiser for the wall memorial was launched during the Memorial Day Remembrance at Woodlawn on May 27, 2013; however, as of this week not enough money has been raised to fund the construction of the commemorative wall and City Hall has not allocated funds for the proposed project in its current budget.

The concept for a commemorative wall to honor those Santa Monicans who died in service was introduced in February.

If the council approves the proposed plan and the requisite funds are raised, a commemorative wall would be built and then unveiled at Woodlawn Cemetery during the next Memorial Day, which is May 26, 2014.

“These costs are exclusively for construction of the monument wall and do not include indirect costs such as staff time associated with the project management and architectural design of this project,” City staff stated.

Specific costs were broken down by City staff, with $12,650 of the estimated budget dedicated to hard costs and $1,518 allocated to contractor overhead and profit. Another $1,265 is line-itemed for construction contingencies, while City Hall allocated $500 for “reimbursable expenses” such as prints and mailers. Finally, $425 is budgeted for bonds and insurance.

The community fundraising program aimed to raise the money needed to cover the proposed budget. City staff stated the fundraiser was sought “due to the lack of available funding for the commemorative wall in the [Fiscal Year] 2012-13 and [Fiscal Year] 2013-15 budgets.”

A website has been developed by City staff to receive donations for the commemorative wall (smgov.net/Departments/Cemetery and click on Commemorative Wall).

According to City staff, only $3,501 in donations from four private donors has been collected.

City staff added the remaining amount – nearly $13,000 – must be raised by February 2014 in order to ensure the commemorative wall is built by Memorial Day 2014.

“As proposed, the monument would be comprised of seven precast concrete panels, one for each war. The location, at the end of the roadway into Woodlawn and at the main entrance to the Mausoleum, offers high visibility and easy access by the public, and is of manageable scale to accommodate a limited project budget,” City staff stated. “The concrete panels provide flexibility should additional names need to be discovered and need to be added, or in the unfortunate circumstance of a new conflict.”