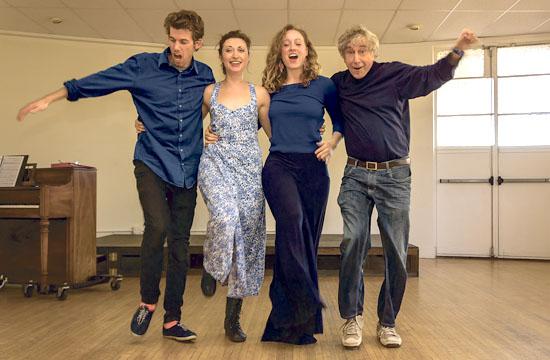 If you’ve ever wanted to experience Berlin in the 1930’s, Tony-award winning veteran actor Paul Sand will provide an opportunity, beginning Friday, Dec. 6, with his unique cabaret production, “Kurt Weill at the Cuttlefish Hotel” at the newly inaugurated West End Theatre at the end of the Santa Monica Pier.

One night while walking with friends along the pier, he said to himself, “this’d be a great place for a Kurt Weill production.”

“He said we happen to have a space so why don’t we just give it to you,” Sand says.

After a three-minute phone call with Harris and in a matter of two weeks, Sand seamlessly assembled an entire cast and production team, including acclaimed music director Michael Roth and well-known artist Marie Lalanne.

The production will take place at the end of the pier, closest to the ocean, in an enclosed observation deck that sits above Mariasol Restaurant.

Sand bypassed holding auditions and instead relied on the notes he’d taken from performances he had seen around town.

“When someone sticks out you remember them,” he says. “I take programs home and make a circle around their name and think, hopefully something comes up.”

And something did come up. With a team on board, generating funds was the next order of business; just like a cuttlefish, Sand extended his tentacles and gathered the necessary funds to get the production off the ground and onto the water.

For Sand, the Santa Monica Pier holds a special place on his memory lane. Although he was raised in the Silverlake neighborhood of Los Angeles, he spent his summers at his parents’ beach rental two blocks from Santa Monica beaches and it is on the pier where he learned to take his first steps.

On a whim, at 19 years old, Sand left Los Angeles and ended up in Paris studying with Marcel Marceau.

His first job was singing and dancing with Judy Garland in her classic, “We’re a Couple of Swells,” that toured the west coast. Since the 1960s Sand has appeared in dozens of television series, including “Taxi,” “St. Elsewhere,” “The X Files” and “Curb Your Enthusiasm.”

The West End Theatre is expected to have 50 to 60 seats, depending on whether tables are included in the space.

Beginning Dec. 13, performances will be held Fridays and Saturdays at 7:30 pm and 9 pm. The show will run through Dec. 21, with the possibility of being extended.

The cabaret will be a “pop-up” theatre on Friday and Saturday nights but will otherwise continue to be open to the public as an observation deck.

Tickets are $20 and can be purchased at www.eventbrite.com/event/8804429285. Parking is available on the pier and at beach level, just north of the pier.

A five-piece band along with fellow actors Megan Rippey, Shay Astar, and Sol Mason, who plays the narrator, will inhabit the currently empty space.

Sand has a vision: special lighting, large murals on canvas, musicians welcoming visitors as they enter the space, a giant cuttlefish atop the theater, all to create an enthralling yet intimate cabaret atmosphere never before experienced over the dark, billowing ocean at Santa Monica Pier.

“We’ll be singing songs about revenge, murder and broken hearts,” he says. “I want to make it a hypnotic show. I want to get them under my spell and keep them there.”