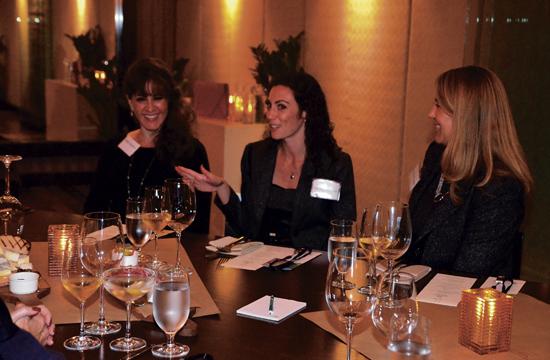 Last week I managed an interesting edu-tainment event for a client of mine, in honor of Breast Cancer Awareness Month. Held at sexy downtown restaurant LeKa (owners of Wokcano restaurants), we combined a gourmet food and wine pairing with a pair of breast cancer surgeons. The docs were there to hold “dinner table” conversation with some of the most influential women who work and/or live in the downtown area.

The event was a smash! The evening started with perfectly chilled champagne and an abundant spread of gourmet cheeses, prosciutto, and French bread. Once all our guests had arrived, we moved into a private, candle-lit dining room. Introductions were made, and the wine and food pairing began.

We started with an appetizer of roasted beets, burrata, avocado mousse, pistachios and pickled shallots, paired with 2011 Points West White from wine sponsors Lone Madrone. A refreshing and tasty way to start the meal.

For the second course, we had a choice of Hangar Steak with Potato Risotto, Watercress Puree, Wild Mushroom, and Truffle Butter; Oven-baked Branzino with Heirloom  Tomato, Fennel and Citrus Salad; or Roasted Chicken with Garlic Jus, Cranberry Beans, Collard Greens, and Parsley. The meals were paired with Lone Madrone’s 2009 Points West Red. The wine was sublime, and perfectly paired with my choice, the Hangar Steak.

It was during the second course (and the second glass of wine) when things really got started. We started asking all kinds of questions about breast care. The highly knowledgeable experts gave us some nuggets of good news:

1. Wearing underwire bras do not cause breast cancer. An actress I met (name shall be withheld) swore that she would never wear such a horribly styled bra because it absolutely caused cancer. Maybe she got that from one of her movie scripts. In any case, not true. I was happy, I like underwire bras. They hold “me” in place.

3. Walking 30 minutes a day will diminish your chances of getting breast cancer by 40 percent! That’s right, 40 percent! An amazing statistic. I’m thrilled – since I got my puppy, I am required to walk her at least 30 minutes, two times a day! I am way ahead of the game.

We had a choice of desserts for the final course. The first option was Sweet Cream Panna Cotta, with Raspberry-Red Currant Sauce and Hazelnut Brittle. The second was Chocolate Cremeux, with Chocolate Crumble, Sesame Brittle, and Passionfruit Rum Sauce, paired with dessert wines Bad Shepard and Sweet Cheeks.

The group was now like old friends, enjoying everyone’s company. My social skills were quickly quelled and I threw down my fork when I heard some bad news from the cancer docs:

Not having children increases your chances of breast cancer. Almost all the women in the room were a bit concerned about this one. They or their friends “forgot” to have kids, and instead chose a high-powered career over being a mom. I made the choice of having a career over having kids when I was very young. I never played house – I played store and princess instead. Even my brother said that I looked better carrying a briefcase instead of a baby!

Duly impressed, when the dinner came to an end, several women declared they wanted these doctors as part of their medical team, and others were immediately inspired to change their lifestyle to lower their chances of getting breast cancer.

Thank you Lone Madrone Wines and LeKa Restaurant for a phenomenal evening! I am now going for a long walk with my pup.