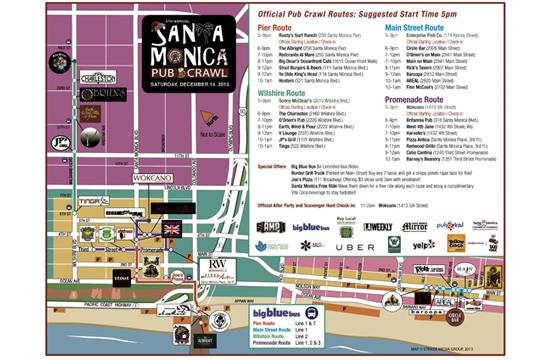 Thousands of revelers will take part in Saturday’s 5th Annual SANTA Monica Pub Crawl, which raises money for those in need through a partnership with the Westside Food Bank.

Now in its fifth year, the pub crawl has four routes to choose from: Pier, Wilshire, Main Street, and Promenade.

All participants are asked to dress in Santa/holiday attire, either individually or in teams, so that the streets of Santa Monica will be filled with merry cheer, such as Santa, Mrs. Claus, Elves, Reindeer, Carolers, and Santa’s Helpers.

An Instagram contest will award the crawler(s) with the most impressive holiday gear with a special prize. Crawlers just need to post a picture in their costume or their team’s costume to Instagram with the hashtag “#SMPUBCRAWLSPIRIT” and tag @SMPubCrawl on Twitter.

To be part of the festivities, crawlers must sign up online, pay a $10 donation/entrance fee, choose a route and collect their wristband and map at their official starting location from 5 pm onwards.

Participating bars will offer crawlers food and drink specials as part of the festivities.

Santa Monica Chamber of Commerce CEO/President Laurel Rosen said The Chamber always lookedforward to the return of the pub crawl.

“This event has quickly become one of the busiest nights of the year for our local businesses and proceeds benefit a great cause for families during the holidays,” Rosen said.

Westside Food Bank Chief Development Officer Genevieve Riutort said the Food Bank was thrilled to be the beneficiary agency for the pub crawl.

“The event has helped to raise awareness about the issue of hunger in our community while also giving people the opportunity to make a difference while having a great time,” Riutort said. “Over the past four years, the Santa Monica Pub Crawl has made it possible for Westside Food Bank to distribute about a quarter million more pounds of food for local families in need. That makes a huge impact, especially during the holidays.”

The pub crawl is a community event and encourages responsible drinking.

Organizers urge crawlers to not drink and drive, but rather assign a designated driver at the beginning of the night, call a taxi from the official partner, Taxi Magic, or use public transportation.

The Big Blue Bus will be selling unlimited bus passes for $4 on the pub crawl website. Additionally, new users can receive $15 off Uber rides with code SMPC, and Santa Monica Free Ride vehicles will be giving free rides up and down each route and handing out Vita Coco Coconut Water for crawlers to hydrate along the way.