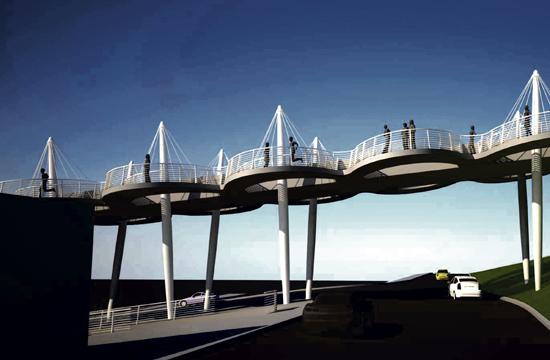 If you stroll enough from the corner of Ocean Avenue and Colorado to Pacific Park or one of the restaurants on the Santa Monica Pier, you are likely to develop a pair of very strong calves. However, the walk from the street down to pier may no longer be as steep as the City Council begins providing input on the Pier Bridge Replacement Project.

Still early in the process, a discussion of how the new Pier Bridge should look like unfolded at the Nov. 26 council meeting. According to City staff, the bridge connecting Ocean Avenue to the Pier – which was built in 1939 – was determined by the Los Angeles County Public Works Department to be “structurally deficient and functionally obsolete.”

A key issue for the new Pier Bridge: accessibility.

The council hoped the new design would make it easier for people with disabilities to access the pier from Ocean Avenue.

On a similar note, council member Bob Holbrook suggested having elevators transport people from street level to sea level similar to what exists at Salvador, Brazil.

According to City staff, the current Pier Bridge is at a 10 percent grade and slows pedestrian speeds.

“The steep slope can be especially difficult to traverse for families, those with limited mobility, elderly, and disabled patrons,” City staff stated. “A key objective is to make the Pier bridge fully ADA [American Disabilities Association] compliant from the Ocean and Colorado intersection – main route – while maintaining full federal funding participation.”

In all, four plans were presented to the council last week, each one potentially ADA compliant but with different means proposed to access the Pier from Ocean and Colorado.

One plan calls for a Pier Bridge that is 58 feet – or 70 percent – wider than the current connector. This plan was suggested for further study and environmental review.

A second plan would replace the current Pier Bridge with a new one of equal dimensions but add an ADA compliant path just north of the bridge. The separate bridge would, according to City staff, have to be 60 percent longer than the Pier Bridge. Thus, the pedestrian bridge would possibly spill into the 1550 parking lot. City staff did not recommend this plan.

Plan No. 3 proposes a vehicular bridge at Moss Avenue just south of the pier. A bicycle and pedestrian bridge would replace the current Pier Bridge. However, this plan would negatively impact delivery and emergency service from Ocean Avenue to the pier and was not recommended by City staff.

The fourth plan would replace the Pier Bridge with “a bridge of the current width designed primarily for pedestrian and bicycle use, as well as limited/controlled use for delivery and emergency vehicles.”

Vehicular access in Plan No. 4 would be provided via an access bridge at Moss Avenue. City staff had recommended the fourth plan for further study.

According to City staff, Santa Monica is eligible to receive federal funding from the Highway Bridge Program to direct at least some funds to the proposed bridge replacement project.

Looking ahead, concept designs for the proposed Pier Bridge replacement will undergo an environmental analysis and review.