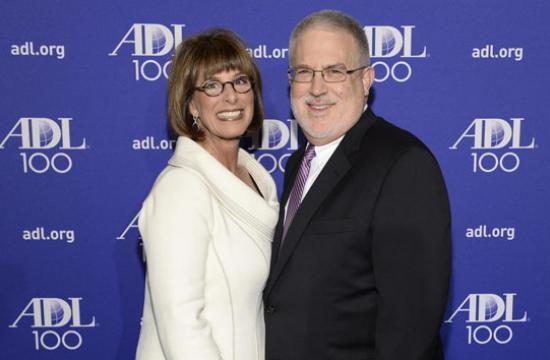 The Anti-Defamation League’s Centennial Gala Celebration at the Beverly Hilton Hotel welcomed about 900 people on Dec. 10. The event raised nearly $1.4 million to support ADL efforts to combat anti-Semitism and bigotry of all kinds.

Among the honorees were Barbara and Thomas J. Leanse of Santa Monica, who received ADL’s Humanitarian Award for excellence in their professional fields and community leadership.

Thomas, a 30-year ADL supporter, accepted the Humanitarian Award with his wife, Barbara, spoke of how ADL’s mission aligns with his world view of “trying to make the world a better place as we pass through on our journey.”

Referencing the Jewish Journal article that featured the Leanses and their philanthropy, Thomas urged all those in attendance to devote time or money to an important cause.

“It is incumbent on all of us to help when we can,” he said. “You don’t have to do a lot, but you do have to do something.”

Barbara, whose social work career began with helping AIDS patients in the 1980s and now includes overseeing a diverse population of volunteers at Cedars-Sinai Medical Center, ended the evening with a poignant story about a volunteer who described her as being “there for him” and, thanked ADL “for accepting us all with our differences.”

In a particularly touching tribute, Los Angeles World Airports Chief of Police Patrick Gannon told of the chief of police at Ben Gurion Airport reaching out to him immediately following the Nov. 1 LAX shootings, which came days after Chief Gannon had visited Israel as part of ADL’s counter-terrorism training program in Israel.

There were numerous poignant moments throughout the evening:

· Erwin Chemerinsky, Dean of UC Irvine School of Law, presented the Jurisprudence Award to “my hero, George Kieffer.”  Chemerinsky explained that he holds Kieffer up as a role model of public service for his students.

· George David Kieffer, in accepting his award, credited ADL as a counterforce to hate – “not hating back, but pushing back against hate and bigotry through education and dialogue.”

· ADL Regional Board Chair Seth Gerber introduced ADL’s Centennial video, Imagine, and described how it allows us “to remember and honor the lives of individuals who have inspired so many of us to pursue justice and fair treatment for all.”

· ADL National Director Abraham Foxman, nearing his 50th anniversary with ADL, reflected on ADL’s 100 years at the “forefront of the struggle to protect the fundamental freedoms of all Americans.”