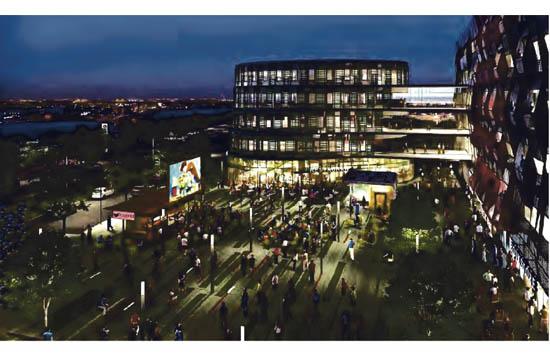 In what could be one of the most significant proposals to be developed within Santa Monica this decade, the Planning Commission narrowly recommended Dec. 4 the Hines/26th Street development agreement (DA) proceed to the City Council.

It took several attempts to find a quorum, but a coalition of four commissioners finally came together to approve a project proposing to build 473 residential units and mixed-use space within the Bergamot Transit Village.

If ultimately approved by the City Council, the Hines project would be built at 1681 26th Street.

Last week’s vote was lodged after the Planning Commission had deliberated this DA through four meetings, including Dec. 4.

Commissioners came into the Dec. 4 meeting looking to address “outstanding design issues.” Indeed, the design plans of many of the buildings proposed in the Hines DA morphed in the past few weeks. Just the same, commissioners sought more community benefits from the developer.

The heart of last week’s discussion focused on housing, office space, and retail. Specifically, some commissioners wanted more housing to be included in the DA.

When the final vote was recorded, Commission Chair Jennifer Kennedy joined Commissioners Sue Himmelrich and Richard McKinnon in voting against recommending the proposed project to the City Council.

Himmelrich, Kennedy, and McKinnon each wanted the proposed development to include more housing in hopes of reducing traffic and maintaining some sort of jobs-to-housing ratio balance.

Prior to the final 4-to-3 vote, the commissioners attempted three times to move forward with a plan.

Two proposed motions failed with a commission split down the middle with Himmelrich, Kennedy, and McKinnon unable to find a fourth vote, including one proposal to reduce the project size but increase housing and another to convert a commercial building into residential.

A third proposal recommending the proposed project be 100 percent residential was shot down by a 5-to-2 vote.

City staff stated the project, if realized, would result a net fiscal impact of about $420,000 annually to the General Fund.

City staff added an economic analysis of the project found the $242 million to be invested into the Hines proposed development would result in a total economic output of $322 million.

The proposed project would create an estimated 2,325 total jobs, including 1,781 on-site construction jobs and $109 million in compensation paid to workers, according to City staff.

Several community benefits are on the table as well, including financial contributions for open space, public transit improvements, new street and sidewalk easements, a transportation management plan, historical and cultural heritage initiatives, and subsidies for childcare, educational, and youth training.

With the Planning Commission’s recommendation, the Hines DA will move forward to the council and arrive on the dais early next year.

The Mirror will continue its coverage of the Hines project and the development of the Bergamot Transit Village when it comes to the council.