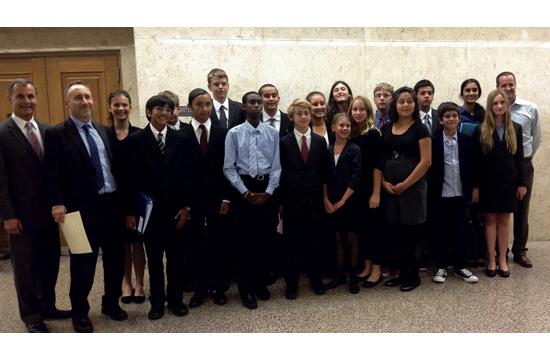 Not a real murder case but a mock trial murder case organized by the Constitution Right Foundation which distributes a fact pattern to participating schools and then recruits California Superior Court Judges to open their courtrooms for the trials featuring the competing schools each year.

This year’s John Adams Middle School team consisted of 16 students who were then divided into a prosecution team and a defense team.

Each attorney had to know how to direct and cross examine witnesses as well as make and oppose objections just like a real attorney would do during a criminal trial.

Witnesses had to memorize a multi page script and be prepared for questioning by an opposing attorney.

This year’s tournament involved a murder case where a 7th a student died from a drug and alcohol overdose.

Goddard said she enjoyed the experience.

“I was really, really nervous but I know that we talked about everything about the case so much, there is nothing they could ask me that we hadn’t already talked about,” Goddard said. “So I just focused on pausing and thinking and answering loud and proud as my coaches constantly remind us. Growing up I thought about working as a lawyer but after this experience, even though it is hard work, I think I would really enjoy being a defense attorney because I like looking for the good in people and I now feel comfortable speaking in public.”

The JAMS team was started when two local parents Bill Sadler and Joel Koury volunteered to organize and coach the team after school. Both coaches have children in the program.

“Bill and I volunteered to set up the program for a couple of reasons,” Koury said. “Middle school is such a difficult transition for some kids and our primary goal was to help these kids find their voice at the same time giving them exposure to a career that many never even knew existed. One of my favorite moments came when a parent came up to me at the end of the competition and said that his daughter had spent much of her life talking about becoming an actress but since participating on our team, she is now talking about becoming a lawyer.”

This year’s competition had 44 teams competing from public and private schools across Los Angeles County. The JAMS team finished in third place after losing in the semi-finals to the eventual champion in an Olympic style finish .18 of a percentage point behind the eventual championship team.