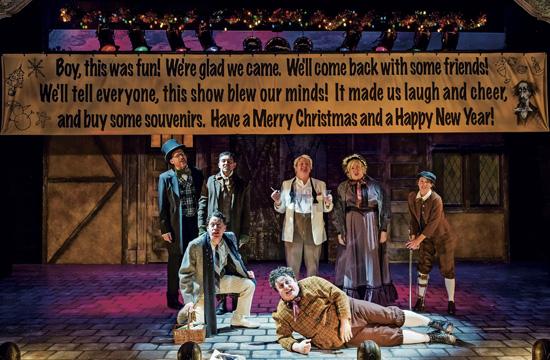 Do you have the holiday blues? Feeling blah? Hate shopping? Hate being nice to relatives you really don’t like? Are you wishing you could go to sleep and when you wake up, all the “festivities” are over? Well, be sad no more as The Second City’s “A Christmas Carol – Twist Your Dickens!” on stage at the Kirk Douglas Theatre is the perfect antidote to the holiday tradition condition.

Written by Peter Gwinn and Bobby Mort, under the impeccable direction by Marc Warzecha, fasten your seat belts for non-stop, mostly irreverent, fractured version of Dickens’ classic tale. It should be noted that before the audience was let into the theatre, they were handed strips of red or green construction paper and were instructed to write the most awful thing they’ve ever done. As we found out later on, this was an important, riotous element to spring upon the unsuspecting audience.

With beautiful Victorian sets by Scenic Designer Tom Buderwitz, the shenanigans begin with a mask-wearing barbershop quartet singing the exposition in comical verse immediately followed by all hell breaking loose. It’s Christmas Eve. The weather is freezing, with a biting cold, chilling wind. Ebenezer Scrooge has lined up several heaters to keep him warm, with none for his devoted, overworked, freezing clerk, who heartbreakingly plays the most abused Bob Cratchit, wonderfully brought to life by Ithamar Enriquez, who appears in an assortment of other characters. He is appropriately obsequious and is forced to work on Christmas Eve. Scrooge, in an act of “kindness,” generously “gifts” his clerk with a day off on Christmas Day.

Ron West’s Ebenezer Scrooge is about as evil and nasty as you can get turning away an assortment of people asking for charitable contributions to provide Christmas dinners for the needy, which he summarily turns down. He scowls saying, “It’s a poor excuse for picking a man’s pocket every twenty-fifth of December. Devoid of any holiday spirit, he abruptly turns down having dinner with his nephew referring to Christmas as “humbug,” adding that, “I’m not coming to a stupid ass party filled with stupid-ass people.”

Scrooge has collected a bucket full of coins, which he dumps on the floor, snarling that “It was like taking candy from a baby who is stupid” or “Good hearted people are gullible.” His office is across the street from an orphanage, which is short of food and Scrooge delights in having his lunch near the window so that “The orphans can what watch me eat.” Really, how mean can he get? But wait. Old Scrooge is about to get his comeuppance and in short order, he experiences the nightmares of being visited by a variety of ghosts, including his deceased business partner Jacob Marley, “scarily” played by Joe Liss, as well as Frank Caeti’s hilarious “The Ghost of Christmas Past,” and “The Ghost of Christmas Present” played by a very amusing Brendan Jennings. This gifted ensemble, with crack timing, skillfully transitions into different characters with very distinct characterizations both vocally and physically.

Amanda Black as the crippled Tiny Tim was comically spot on with her uttering such Pollyannaish lines as “The sun peeked through the soot for a few minutes.” A most talented, amusing Jaime Moyer plays Mrs. Cratchit, along with other delightful characters. No subject was satirically off limits and included the actors’ heads poking through cut outs of some of the Peanuts characters including Charlie Brown, Lucy, Snoopy, and Linus who argued about the ending of “A Charlie Brown Christmas.”

One very amusing element is that every once in a while one of the actors sitting in the audience would interrupt the proceedings to point out to the actor Ron West/Scrooge that they are mixing periods as there were “No vertical file cabinets in the nineteenth century or barbershop quartets.” These interruptions are scattered throughout the evening, causing the audience, to erupt in laughter that was continuous throughout the entire production. There are so many funny scenes including the spoof on Oliver Twist where the orphans have formed Local 101, a union that is demanding more and better food, and not just the junk they’re being fed. Batman makes an appearance in protest against Charles Dickens.

Now, remember that audience members were asked to list their worst offenses and it’s at this point along comes “The Ghost of Jacob Marley” wearing a garland of the notes written by audience members and he begins to read some of the sins. The audience howled as confessions were read: “I took the last piece of my son’s candy,” or “I blinded a parakeet with a laser printer,” or “I copied off of a kid’s test and wound up failing because he was stupider than me,” or “I once had twenty hookers in Malaysia,” or “I was making love on the floor to the husband of a friend when we heard his wife’s voice coming down the hall and the key inserted into the lock. We froze. Luckily he had the office locks changed and her key didn’t fit.”

Experiencing all his ghastly, ghostly visitations, Scrooge becomes graphically aware of the errors of his mean ways and transitions into a nice guy, accepting his nephew’s dinner invitation, donating money to charities and everyone lives happily ever after, with the hilarious theatrical adventure culminating in an audience sing-along.

One of the characters asks “Is this heaven?” Another replies: It can’t be. It’s Culver City.” So, given that it’s easier to get to Culver City than heaven (depending on traffic, heaven might be easier). you owe it to yourself to jump into your buggy and trot over to the Kirk Douglas Theatre where you are assured of washing away any of those holiday blahs.