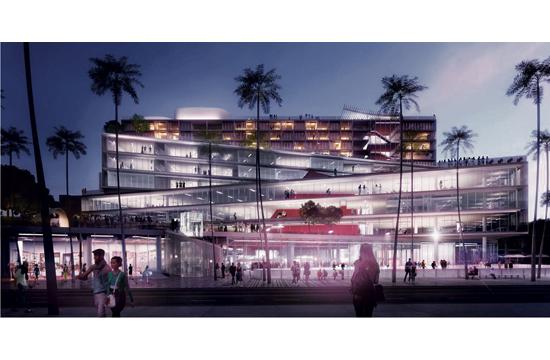 Two went in, one came out. Council members unanimously selected a developer Tuesday to enter an exclusive negotiating agreement for the right to eventually build a project on City-owned property between Fourth and Fifth Streets south of Arizona Avenue.

The Santa Monica City Council selected Metro Pacific Capital to exclusively negotiate how to develop the downtown property, which is walking distance to the Third Street Promenade.

Earlier this year on Aug. 27, City staff had recommended that the City Council enter into exclusive negotiations with the Metro Pacific team based on the selection panel’s determination that their proposal best addressed the evaluation criteria and development objectives for the development site.

However, at that City Council meeting, council members instead directed staff to request additional information from two of the three applicant teams – the Metro Pacific Capital team and the Related California team – and to report back to Council in December.

It was Metro Pacific Capital’s new proposal on Tuesday that came out triumphant. Its plan calls for a 448,000-plus square foot mixed-use project, which would include a hotel, office space, residences, and retail.

By comparison, Related California proposed a 484,000-plus square foot project with more residential units. However, the proposed project did not include plans for a hotel.

A major factor in deciding which developer to select, City staff stated, was the number of market-rate residential units and the proposed hotel.

Another difference between both projects: the amount of money each could generate for the City.

Metro Pacific Capital reported to City staff its project could produce almost $6.4 million annually in City revenues, compared to about $4.7 million by the Related California project.

Both Metro Pacific Capital and Related Capital were given guidelines to follow in creating its respective proposals.

The guidelines were: develop a programmable gathering space; provide ground-floor retail, restaurant, and cultural space; ensure the project has “a mix of uses such as retail, cultural, office, hotel and residential; be of exceptional architecture and sustainable design; have public access to views; provide at least 339 parking spaces; the approach to development should be flexible; and, the plans should incorporate concepts identified in the Downtown Specific Plan process.

Metro Pacific Capital still has quite a ways to go before entering into a development agreement (DA) with City Hall.

With the council’s decision Dec. 10, City Hall and Metro Pacific Capital will be entering into an Exclusive Negotiating Agreement, or ENA.

The ENA, according to City Hall, “affirms that the City will not negotiate with any other developer for the development of the site for the duration of the ENA.”

“Entering into an ENA does not convey project approval or obligate the City to grant any entitlements. The ENA would require that the Developer make a good-faith deposit with the City and demonstrate evidence of financing prior to execution of a ground lease,” City staff stated.

During the exclusive negotiation, City officials and Metro Pacific Capital would determine the terms and conditions of the project, establish a schedule of performance, provide design concepts, and ultimately enter into a DA.

Also part of the process, if it gets that far, would be input from the public, Architectural Review Board, and the Planning Commission. The final step would be a public hearing and vote at a council meeting.

“This project would proceed in tandem with the Downtown Specific Plan process, and the two efforts would continue to be coordinated,” City staff stated. “A development agreement application would not likely be submitted until sometime in 2014 and construction would not be expected to commence until 2016.”