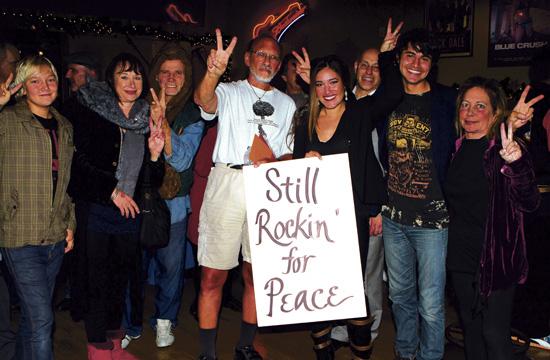 The celebration doubled as a “Save Chain Reaction” benefit party. Nearly 150 people attended and more than $4,000 was raised.

Phillips then took Rubin’s hand and sang to him a heartfelt and melodic “Happy Birthday.”

Phillips also contributed to the ‘Save Chain Reaction’ fundraising effort.

Phillips was joined by Chris Carter, radio host of “Breakfast With the Beatles” in lighting the candles and cutting the cake. The “peace cake” was donated by creative bakery Cake and Art.

The featured speaker was actress and activist Alexandra Paul, who spoke about Rubin’s 30 plus years of activism. The other highlighted speaker was David Conrad, the son of the late Paul Conrad, who designed and created the 26-foot tall monumental public art sculpture, and who is now leading the Save Chain Reaction campaign to protect and restore the sculpture that his father gifted to Santa Monica. Also speaking was Ed Ellis, a founder of Veterans for Peace, Los Angeles, whose group recently contributed $1,000 to help restore the iconic and important sculpture.

The featured performer was actress, singer and activist Q’Orianka Kilcher, who starred as Pochahontas in the film “The New World.” Kilcher also talked about how she first met Rubin at his bumper sticker table when, as an eight-year old, she was street performing on Santa Monica’s Third Street Promenade.

Opening the celebration was David Zasloff, who performed a soulful solo flute version of “Happy Birthday.” Popular humorist Rick Overton, who was scheduled to do stand-up comedy, was unable to attend because of the flu.

Santa Monica Mayor Pam O’Connor dropped by and took the stage to wish Rubin a “fantastic and very happy birthday.” Also attending were James Conn, Judy Abdo, and Paul Rosenstein, three of the eight former Santa Monica mayors who are supporting the ‘Save Chain Reaction’ campaign.

At the event, Rubin and Conrad urged everyone to get involved in supporting the Save Chain Reaction campaign and to continue donating funds to help restore the unique sculpture. They urged people to visit the campaign website at SaveChainReaction.com.