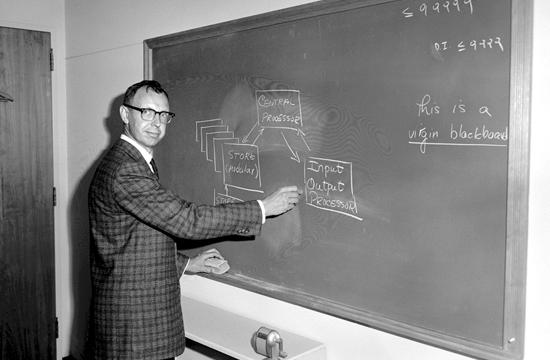 A man who worked as an engineer at the RAND Corporation in the 1960s who forecast the role personal computers would play in our lives and the challenges they posed to individual privacy passed away just days before Thanksgiving.

According to RAND, Willis Ware passed away Nov. 22 at his home in Santa Monica. He was 93.

Considered a pioneer in computer technology and personal privacy, Ware predicted in the 1960s “a small computer may conceivably become another appliance in the home.”

Ware had reportedly researched computer technology use in the military and in society at-large.

“The computer will touch men everywhere and in every way, almost on a minute-to-minute basis,” Ware once wrote almost a half decade ago. “Every man will communicate through a computer whatever he does. It will change and reshape his life, modify his career and force him to accept a life of continuous change.”

Beyond predicting how computer technology would infiltrate our lives, Ware also played an influential role in developing privacy policy.

Specifically, Ware was involved with several committees aiming to protect personal privacy in the context of computer technology. His work on these committees was instrumental to the creation of the Federal Privacy Act of 1974.

RAND president and CEO Michael D. Rich said Ware’s understanding of computer technology and personal privacy was far “ahead of his time.”

“Willis helped usher RAND into the computer era at a time when computers existed mostly in the realm of science fiction,” Rich said. “He was ahead of his time in thinking about the profound effects that computers could have on information privacy. The principles he set forth in 1973 remain relevant to today’s debate about privacy and security.”

An electrical engineer by trade, Ware was part of the crew who built one of the world’s first electric computers – the IAS – in the 1940s.

In 1952, Ware joined the RAND Corporation and helped build an IAS clone: the Johniac. While the IAS broke barriers, it was the Johniac that helped make computer use more commonplace in everyday life.

“Johnniac demonstrated a lot of firsts – a machine that could run hundreds of hours without an error, early program tricks of the trade, a multiuser environment, the first rotating drum printer … and for a short while, the largest core memory,” Ware stated in an interview with the IEEE Annals of the History of Computing.

In all, Ware reportedly worked at RAND for more than 55 years. According to RAND, he authored studies in the 1990s exploring “new dimensions of privacy in an increasingly computerized world.”

Ware penned a memoir in 2008 entitled “RAND and the Information Evolution: A History in Essays and Vignettes.”

Born in Atlantic City, N.J., Aug. 31, 1920, Ware studied electronic engineering at the University of Pennsylvania and MIT before moving on to Hazeltine Electronics Corporation in New York to design classified radar detection tools during World War II; he earned his doctorate in electrical engineering from Princeton University.

Ware reportedly moved to the Los Angeles area in 1951, joining the RAND computer science team here in Santa Monica after a short stint in the aerospace industry. Earlier this year, Ware was inducted into the National Cyber Security Hall of Fame, according to RAND.

RAND said a memorial service is planned for early 2014.