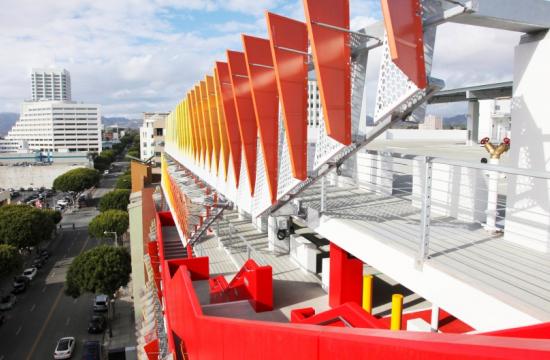 The City of Santa Monica has officially opened its new Parking Structure #6 at 1431 2nd Street (between Broadway and Santa Monica Boulevard) in downtown Santa Monica.

The project, which began construction in March 2012, opened Thursday at 2 pm for its much-anticipated debut just in time for the upcoming final days of the holiday shopping season.

Besides providing much needed additional parking for downtown Santa Monica and Third Street Promenade, Parking Structure #6 has been designed to the U.S. Green Building Council’s LEED silver standards and is the city’s most eco-friendly structure to date.

Besides the dramatic red diagonal staircase, the new structure features 744 parking spaces (for a net increase of 400 spaces), 30 electric vehicle charging stations (with room for 130 more in the future), 80 kw of solar panels on the roof and enclosed bike racks on the ground level accommodating 72 bikes in addition to the bike bollards on 2nd Street sidewalk which hold 40 bikes.

“The re-opening of Parking Structure 6 complements the 7,412 city-owned spaces already serving downtown Santa Monica,” O’Connor said. “The additional parking spaces now available will lighten the load for the other structures in the area and therefore lesson traffic congestion from cars circling looking for spaces.”

Santa Monica City Manager Rod Gould said the City had made the most of this valuable downtown space.

“By almost doubling the number of parking spots, designing to the U.S. Green Building Council’s LEED silver standards, and incorporating sustainable elements, such as electric vehicle charging stations and rooftop solar panels, we’ve been able to come up with a structure that will benefit residents, visitors and the environment for years to come,” Gould said.