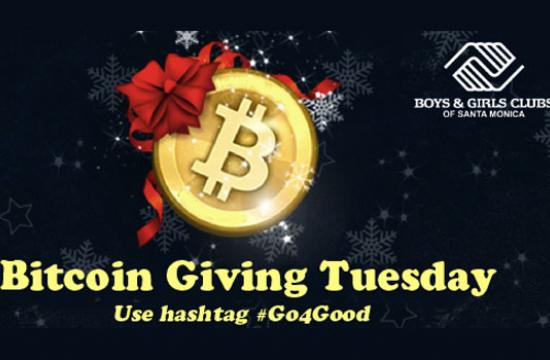 GoCoin, a leading payment platform for the Bitcoin economy, is participating in Giving Tuesday by asking the Bitcoin community to contribute to its #GO4Good campaign and raise money for the Boys & Girls Clubs of Santa Monica (BGCSM).

Through its online campaign to highlight the positive uses of Bitcoin, GoCoin’s #GO4Good campaign asks participants to tweet using the hashtag on Giving Tuesday and the GoCoin founders will donate $10 per tweet and match Bitcoin donations up to $10,000.

Donations to the BGCSM will benefit at-risk youth and under-privileged families in the same community where the GoCoin US team resides, Santa Monica.

“Some of the most progressive retail brands are joining the Bitcoin revolution,” said Steve Beauregard, GoCoin’s founder and CEO. “We are opening the playing field for charitable and political campaign contributions as well. Giving has never fully recovered from the financial crisis of 2008, but people want to give, and that’s especially true for Bitcoin investors.”

BGCSM is the first of the Boys & Girls Clubs of America taking donations in the revolutionary peer-to-peer digital currency. Bitcoin donations to the Clubs will be instantly and securely converted into U.S. dollars.

GoCoin’s trusted payment platform has been in private beta with a targeted client base of e-commerce and charitable merchants since early November.

“We are thrilled to be the first of the Boys & Girls Clubs of America, and one of the first non-profits in Los Angeles to welcome Bitcoin users,” said Aaron Young, BGCSM CEO. “Not only is our goal to stay on the cutting edge of technology, but to also provide as many options as possible for our community to support and contribute to our efforts to help those in need.”

For more information or to contribute, visit smbgc.secure.force.com/donate.