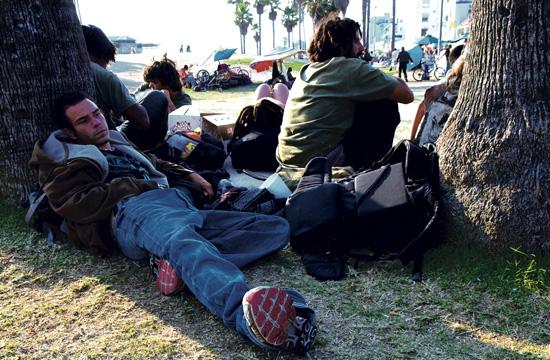 Tears stream down Kiki’s adolescent face as she recounts escaping the horrors of her childhood, and the abuse she endured at the hands of her mother’s ex-boyfriend, in the promotional trailer for “American Street Kid.” Off-camera, writer and director Michael Leoni solemnly says, “I’m sorry.”

Moments later he steps in front of the camera to embrace her, shifting the documentary from informational to relational – about human connection.

Kiki is one of 300 children from across America who were interviewed in the documentary – the majority of the film was shot in Santa Monica and Venice.

The documentary takes a look at the personal lives of several homeless children. It sheds a blinding light on the conditions they endure, and in turn, refutes the oft-cited claim that homeless youth are uncontrollable teenagers who left home because they did not want to live under their parents’ discipline.

A U.S. Department of Health and Human Services study found 46 percent of homeless youth left their home because of physical abuse; 17 percent left because of sexual abuse. More than 50 percent of young people in shelters and on the streets report that their parents told them to leave or knew they were leaving and didn’t care.

Five-and-a-half years ago, Leoni and producers Michelle Kaufer (from Santa Monica) and Erica Katzin took to the streets to talk to some of the 18,000 homeless youth living in Los Angeles.

“A lot of these kids are leaving unbearable foster homes at eight years old,” Leoni said. “This is more of an adult issue. Who is parenting these children?”

It did not take long for Leoni to see these children for who they truly were: emotionally traumatized in need of love and a listening ear.

He realized he could no longer sit on the sidelines and just record their lives. The children needed someone to champion them, to hold their hands, and answer their cries for help.

“I bring kids to my house,” Leoni said. “When a kid is calling me in the middle of the night when they’ve been raped or stabbed, I can’t call the police because some of them are underage and they would just take them back home, which is where they are running from in the first place.”

Leoni found himself on the verge of homelessness in New York City. The idea for the documentary came after a play he wrote titled “The Playground” about homeless children he befriended as a 19-year-old. This play was both set and opened in Los Angeles. It was at one of the shows that Leoni met Kaufer.

The untimely death of two teenage girls they met at a show – one died from a heroine overdose and the other, a prostitute, was murdered – sparked a new fire under Leoni and Kaufer. The perpetual gravity of teen homelessness, the mortality rate, and the lifestyles forced on kids who strive to attain the basics were reasons for them to dig deeper.

For Leoni and Kaufer, the play was not enough.

They began interviewing children in the Venice and Santa Monica areas. What initially started as a PSA turned into dozens of hours of interviews with more than 300 kids and a feature length documentary.

Kaufer said there is housing for homeless youth, but added those places were teeming with children and seldom had vacancies.

“There are youth programs and people doing amazing work but there is still a wait list,” Kaufer said. “Even if you are lucky enough to get a kid into a place, a program with a bed, they still need guidance. They have been through so much emotional trauma. They have been fighting for their lives in the streets, doing all these things to survive.”

The documentary is yet to be completed. Funding is needed for final interviews, updates, wrap-ups, etc, and mostly post production – editing, music composition and licensing, color correction, sound mix and final output.

Kaufer said they had started their own organization called Spare Some Change.

“It is two fold: an ongoing media campaign for constant stream of awareness about homeless youth, and a mentoring program developed through Michael’s ability to get through to the kids,” Kaufer said.

Spare Some Change has partnered with the National Association for the Education of Young Children (NAEHCY) to organize community screenings once the documentary is completed. NAEHCY has sent task forces into communities around the country to use the film as a launch pad for roundtable discussions about youth homelessness.

Kaufer said there are plenty of people wanting to help make a change.

“What I hear overwhelmingly is, ‘I did not know. What can I do?’ Kaufer said. Awareness is the first step. You can’t solve it unless you know it exists.This film will create awareness. My goal is to raise the funds to finish this to make people aware so that change becomes the next step.”

To donate toward the films completion, visit americanstreetkid.com and/or sparesomechangethemovement.org.