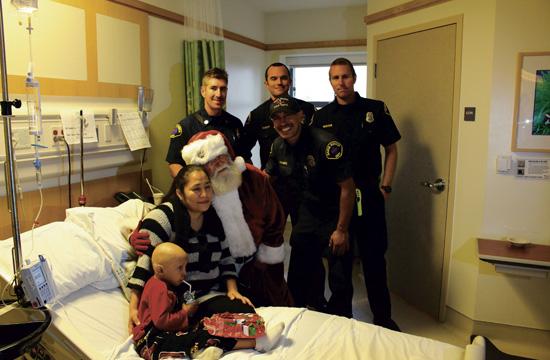 Nearly a dozen off-duty Santa Monica firefighters, along with Santa himself, distributed gifts to the pediatric patients. Firefighters rolled a wagon full of wrapped gifts as they walked excitedly from room to room.

Fire Department Captain James Altman said the annual visit provided an opportunity for the department to independently take care of their community.

“We do it because we want to do it,” Altman said. “We don’t expect any public funds to support it.”

The gifts are collected at the Fire Department’s Christmas party; each firefighter brings a gift.

Four years ago, Altman approached Child Life Supervisor Laila Ramji about a way to bring Christmas cheer to children confined to the hospital during the winter holiday season.

“It’s amazing because we have Santa,” Ramji said. “The children are stuck in the hospital – they don’t go anywhere. Whether they celebrate Christmas or not, the buzz is still out there. They know that we, the hospital staff, care for them, but to know that people in the community care for them is really beautiful.”

Outside of the annual hospital visit, the Santa Monica Fire Department holds “Adopt A Family,” a program that pairs firefighter families with local families in need during the winter holiday season.

Altman said once families are assigned he sends emails to members of the department who then respond with the families they’d like to adopt.

“It’s a cool way for our families to support families in the community,” Altman said.

Public safety helpers distributed good cheer and thousands of candy canes to children and their families.