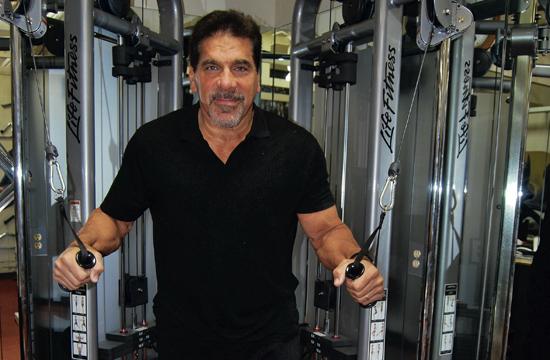 He once portrayed the Incredible Hulk on television, an emotional response to a fugitive scientist who morphed from a human being to a powerful beast. That was from 1978 to 1982. Today, Lou Ferrigno lives in Santa Monica and is making a living by helping people peacefully find health without spending a lot of green.

The Incredibly FIT program is made up of five core components: exercise, education, entertainment, meal plan, and support.

Speaking with Ferrigno at his personal gym, the former actor and bodybuilder told The Mirror the 12-week program, which was launched in June, aims to get participants in the habit of consistently working out, watching what they eat, and proactively taking charge of their health everyday.

Ferrigno said the program, which costs $100, can be used by “any body, any size, any shape.”

“You don’t need a trainer,” he said. “You train yourself.”

Anyone who signs up for the 12-week program receives customized meal plans, a weekly exercise video 30 to 45 minutes in length, information on muscle fatigue and how to fight cravings, entertaining programming featuring Ferrigno and his staff, and one-on-one staff support.

Each week’s video picks up the intensity.

In the first week, the video teaches participants about form. Two weeks later, kickboxing is infused into the routine. Later videos teach participants how to control form and maintain various speeds in order to maximize results.

The final video provides tips and methods of how to monitor ones progress and maintain good health after the 12-week program is complete.

“It’s all about consistency,” Ferrigno said. “You can’t work out and be in shape just doing this once a week.”

Ferrigno added the $100 fee for a 12-week training program is a much more economical choice, compared to spending more than $2,000 for a similar weekly program with a personal trainer.

When at comic conventions and public appearances, Ferrigno said there have been individuals who approached him and informed him of how they lost 50 or 70 pounds courtesy of the bodybuilder’s fitness program.

In addition to starring as the Incredible Hulk on television, Ferrigno also won Mr. Universe at the age of 21. He started weight training at the age of 13.

Prior to starring in CBS’s “The Incredible Hulk,” Ferrigno gained popularity in the 1975 documentary “Pumping Iron,” which highlighted the bodybuilder competing with Arnold Schwarzenegger in the Mr. Olympia competition.

Ferrigno added his training business is a family-operated endeavor and based here in Santa Monica. He could be available for personal training independent of the Incredibly FIT program. Those interested in working with Ferrigno directly may contact him through the website.