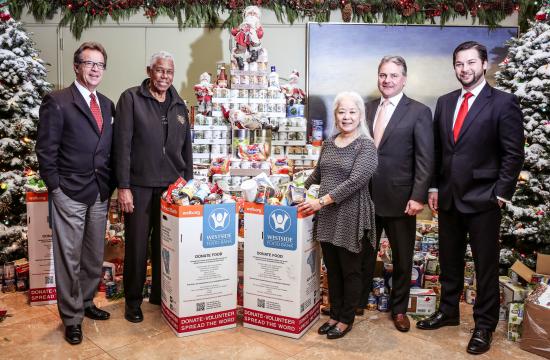 Families gathered under the historic Moreton Bay fig tree at the Fairmont Miramar Hotel on Sunday to celebrate the holiday season during the free community event “Meet Me Under the Fig Tree.”

Attendees were encouraged to bring cans of non-perishable food to be donated to The Westside Food Bank. In total, 8,345 pounds of food will be distributed to deserving families in the community.

“We are astounded and appreciative of the amount of canned food we collected during the event,” said Alan Epstein of MSD Capital, representing the owner of the Fairmont Miramar Hotel & Bungalows. “These donations will greatly impact the lives of the less fortunate in our community. It was our sincere pleasure to host such a spirited community event and we thank those who attended.”

Iao Katagiri, RAND’s community relations director and Westside Food Bank board member for over 20 years, said generosity shown by the people of Santa Monica Sunday didn’t surprise her at all.

“Neither does the fact that the Fairmont Miramar Hotel created such a warm holiday celebration and opened its doors to the entire community to enjoy and join in helping others,” Katagiri said. “Sunday’s event was right in line with all the things the Miramar has done to support the community for at least the 40 years that I’ve been here.”