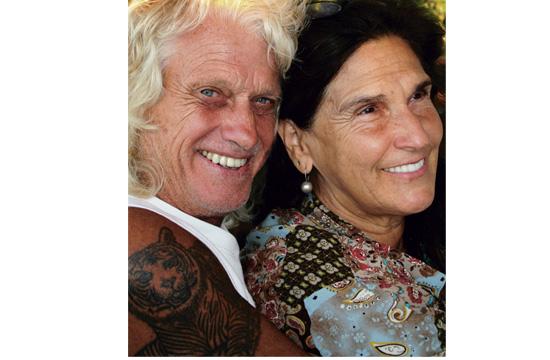 The other day at a Santa Monica gathering, I was talking with friends about my column, and they suggested I write a story about tattoos. Tattoos? I don’t know too many women our age that have tattoos.

Little did I know that all of the women that I was talking to did. They revealed them, one by one. One had a tiny flower near her chest. One had a heart on her neck. And one had a tattoo of Piglet (yes the Winnie the Pooh Character, her favorite) on her right ta-ta. I was surprised. These women, most over 50, all had tattoos under their conservative business suits. Wow.

I begrudgingly said I would do a column, just for them. I certainly did not have a tattoo, nor was I going to get one any time soon. I always thought they looked kind of trashy, but now I was beginning to feel left out.

I think that some guys look pretty hot with tattoos – like musician Adam Levine, lead singer for Maroon Five. I saw a picture of him naked on a motorcycle. Could not help seeing his tattoos, and everything else. But he’s 30! Angelina Jolie looks pretty cool with her tats, but anything would look good on her and she’s not close to 50 years old!

I did some research about women over 50 getting tattoos and here’s what I found:

The relationship between women and tattoos has evolved over the years. A few hundred years ago, a tattoo was considered as a symbol to identify a women’s skill. If a woman was skilled in cooking, a tattoo symbol would be placed on her forehead, and it would give her a better chance of getting married. As years passed, tattoos became frowned upon for women and it indicated dirtiness, in appearance or attitude.

These days, attitudes about tattoos and techniques have changed, opening up a new market. People now see tattoos as a form of art and expression – they’re not just for criminals or “bad” girls.

And women over 50 getting tattoos are on the rise. And they get them for a variety of reasons. Sometimes it can be because they have lost someone close to them. For some people it’s often deeply spiritual, and they can definitely boost body confidence.

I spoke with a local tattoo artist who told me what kind of tattoos women over 50 tend to get. Usually smaller than those younger people get, there’s butterflies, roses, feathers, hearts, initials, stars, angels, animals and many others. Places where the tattoos are placed include shoulders, neckline, ankle, on or near the breast.

But for older clients, certain considerations must be made. Skin becomes less elastic as it ages, more thin and papery. It bruises more easily. Artists set their needles to a shallower depth and work more slowly for older skin.

Sun damage increases the risk of the ink “blowing out” – leaking into places it’s not supposed to go. Conditions such as diabetes can cause circulation problems in the extremities, and a person on blood thinners is in danger of bleeding more.

Then there is the matter of wrinkles. In terms of image quality, it can actually be better to wait until later years, my tattoo artist advised. If you’ve already got saggy skin, you don’t have to worry about the tattoo sagging. If you got a tattoo in your twenties, as you get older, the lines are going to thicken, and black will turn to blue. If you get it later, the less likely that is to happen.

One in five adults in the U.S. have tattoos, according to a Harris Interactive survey. Though the people most likely to get tattoos are in their 30s, the survey found more people aged 50-64 were likely to say they had a tattoo in 2012 compared to 2008 (11 percent versus 8 percent).

Still not enough to convince me. But if I did, a tiny puppy angel would look cute on my shoulder.