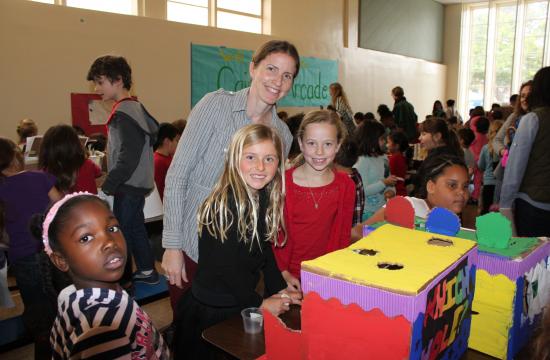 Will Rogers Elementary School in Santa Monica held a Caine’s Arcade event on Thursday where all classes from 1st through 5th grade enjoyed a day of sharing their creations.

The students had been working on their arcade machines for a couple of weeks, and the whole school played the games during three sessions over the course of the day.

Caine’s Arcade is an inspiring story from east Los Angeles, about a boy who built an arcade from cardboard in his dad’s auto parts store.

His first customer was a local film-maker who ended up organizing a flash mob to come out and play, and the story became a world-wide event.

“Plenty of parents came in to play the games, and students all played games too,” Wright said. “It’s a wonderful example of students working together in teams, using their imaginations, and a lot of recycled materials to make something special.”