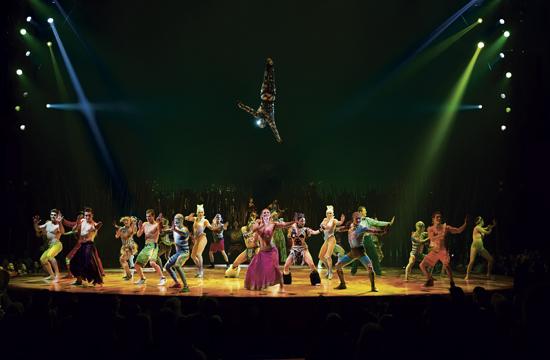 Inspired by many founding myths, Cirque du Soleil’s “Totem” under the big top tent next to the Santa Monica Pier illustrates, through a visual and acrobatic language, the evolutionary progress of species.

The traveling production, which opened last Friday and runs through March 16, is written and directed by Robert Lepage.

The show traces the fascinating journey of the human species from its original amphibian state to its ultimate desire to fly.

The characters evolve on a stage evoking a giant turtle, the symbol of origin for many ancient civilizations.

Here is a look at 10 of the most stunning acts.

A giant turtle at centre stage represents the origins of life on Earth. The creature’s shell is whisked away to reveal an effervescent community of amphibians and fish that lives beneath its carapace. They burst into a playful parallel bars number, with artists embodying frogs launching themselves into the air from a power track and leaping from one bar to the next, criss-crossing in mid-air with inches to spare.

An Amerindian artist performs a narrative dance, using hoops to create static and dynamic shapes to evoke various animals and images in a ritual that symbolizes the endless circle of life. In Part 2, two Amerindian dancers take the stage to create new figures with their hoops surrounded by members of numerous tribes, finishing with a globe and the wings of an eagle.

Bollywood-inspired music accompanies two men as they compete against each other on the rings – until a woman arrives and shows them how it’s done. Their graceful movements, sheer physical strength and superb physiques take to the skies above a summer beach.

Two Crystal Ladies emerge from the fiery bowels of the earth to evoke the creation of the world and the beauty of minerals. Wearing sparkling costumes that mirror the Crystal Man, the artists spin squares of glittering material on their hands and feet before coming together to create a dazzling display of coordinated high-speed motion.

With astounding strength, the agile performer contorts his body in different positions while balancing on his hands atop a platform shaped as an hourglass. The act explores a man’s struggle outside of his contacts with other human beings. The strength that he gets from this journey refers to all challenges one must face in order to grow.

The Tracker appears as a virile toreador spinning his devil sticks to a sizzling flamenco-inspired beat.

Like two lovebirds, a young man and woman tease, play, and sulk in an innocent game of seduction and eventually intertwine their bodies in a light-hearted vertical dance of fresh, unusual movements and lifts.

The Scientist represents reason and the quest to understand the universe in ways that can be quantified, measured and put into boxes. His “laboratory” features an orchestra of glass containers filled with mysterious fluorescent fluids as he steps into a transparent cone and juggles with luminous balls that might represent planets or molecules – or both – making them chase after each other in spiral orbits.

In a scene that evokes a wedding ceremony, a pair of roller skaters spins and whirls at heart-stopping speeds atop a tiny platform – just six feet in diameter – shaped like a drum.

Wearing colorful costumes inspired in part by the lost civilizations of South America, 10 artists perform feats of strength, balance, and acrobatic movements. The jumpers are launched into the air and fly weightlessly across the sky like cosmonauts, leaping from one bar to the next with astonishing agility in a thrilling evocation of the human desire to escape the Earth’s gravity.

General admission adult tickets are available starting at $55 ($45 for children 2-12, $50 students 13+ with ID/seniors) at www.cirquedusoleil.com/totem.