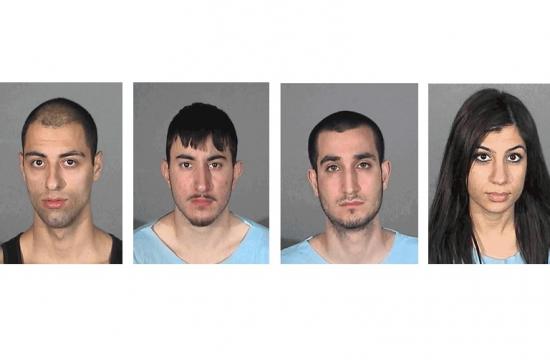 Four young adults and a juvenile from Burbank and Glendale are in custody for attempted murder after a stabbing incident on the Santa Monica Pier in the early morning hours of Saturday, Jan. 18.

The Santa Monica Police Department arrested the five individuals whom they believe were involved in a stabbing incident at 1:20 am on the fishing deck on the far west end of the pier when they began arguing with two fishermen aged 43 and 30.

SMPD Sgt. Jay Moroso said the argument escalated to the point where the group of five attacked the other two.

“During the altercation, both victims were stabbed multiple times in the torso and arms,” Moroso said. “The suspects left the pier fishing deck and walked east on the pier. The victims reported the incident to pier and Harbor Service Officers who immediately began to administer first aid until Santa Monica Fire Department Paramedics arrived.”

Moroso said SMPD officers, who were working on the pier at the time, were notified and responded.

“The officers saw a group of individuals walking east on the pier who matched the description of the assailants and subsequently detained them,” he said. “Identifications were later made of the group, implicating them in the crime.”

Moroso said the victims were transported to a local trauma center where the more serious of the two was immediately sent to surgery for attention to his wounds.

He said both victims are in stable condition and expected to survive.

Moroso said all five of the suspects were booked for attempted homicide.

“Four of them are adults and bail was set at $1 million for each of them,” he said. “The other suspect arrested was a minor. He was booked into juvenile hall and no bail has been set for him.”

The suspects are identified as:

Anyone with information regarding this crime is asked to call the Santa Monica Police Department’s Investigations Division at 310.458.8451 during normal business hours. Information may also be reported to the Communications Center after hours at 310.458.8491.

Anonymous tipsters may contact Crime Stoppers at 800.222.TIPS (8477) or www.lacrimestoppers.org. To text an anonymous tip to Crime Stoppers; please view their webpage for detailed instructions. If the information leads to an arrest, the tipster is eligible to receive a reward of up to $1,000.