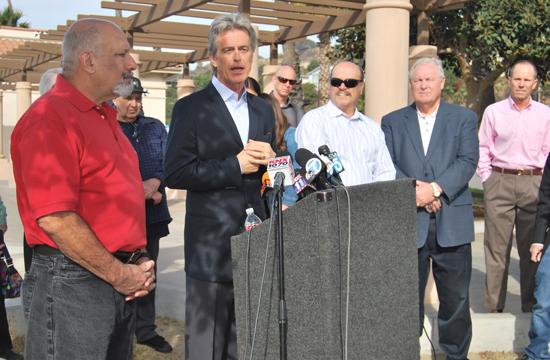 With key local and national dignitaries, including his sister Maria Shriver and Santa Monica City Council members Bob Holbrook and Tony Vazquez, standing beside or near him during his announcement at Will Rogers State Beach in the Pacific Palisades, Shriver said he is running for county supervisor to “fix things,” “shake things up at the county,” and “make it transparent.”

“I am an entrepreneur not a career politician, and I am committed to solving tough problems in LA County … and get projects done on time and on budget,” Shriver said. “I can do this because I have done it before.”

Shriver, the nephew of the late President John F. Kennedy, cited his work on the Santa Monica City Council, where he spent eight years as mayor, mayor pro tem, and council member.

Specifically, he pointed out his work in helping Santa Monica maintain an annual balanced budget and AAA credit rating, building housing and providing services for homeless veterans, and pushing to have Santa Monica Bay cleaned up.

The issues Shriver hopes to address should he be elected to the Third Supervisorial District, which is currently held by soon to be termed-out Zev Yaroslavsky, include minimizing homelessness, addressing reports and allegations of abuse and misconduct in county jails, job creation, foster care, traffic and gridlock, the current drought, and possible modernization of fire and police protection.

The former Santa Monica mayor also stated he, if elected, would push for a rail line directly into LAX. Currently, the Metro Green Line drops off LAX-bound passengers about two miles shy of the airport.

An iteration of Metro’s proposed Crenshaw Line, which connects the Green Line at the 105 Freeway to the Expo Line in Leimert Park, would drop airport-bound passengers right at the airport.

However, the Metro board is reportedly leaning closer toward a plan where, similar to the Blue Line, LAX-bound passengers would be dropped off about two miles away from the airport and take a shuttle bus to his or her respective terminal.

For San Fernando Valley residents, Shriver vowed to fight for the region’s “fair share of transportation funding to cut gridlock.”

Another key issue for Shriver was accessibility and transparency.

In September 2013, a Los Angeles Times report observed the five county supervisors enjoy substantial political clout and power yet, prior to the enactment of term limits, were not subject to any noticeable level of oversight.

When asked by The Mirror how he would change such a perception should his supervisorial campaign become successful, Shriver noted the citizens of Los Angeles County should have as much access to the process as possible.

As a start, Shriver suggested having the supervisorial meetings be held at different locations across the county.

“I thought the meetings should move around a little bit,” Shriver told The Mirror, adding how meetings of the Santa Monica Parks and Recreation Commission were held in various locations to maximize community input.

“It’s tough to get down there (to the supervisorial meetings). It’s downtown, it’s $20 (for parking). I hope we’ll be able to move the meetings around and people will have access … to the process than they have had,” Shriver added.

Each supervisor represents about 1.9 million constituents. While the supervisors meet at the Kenneth Hahn Hall of Administration in downtown Los Angeles, the five-member board represent people as far north as the Antelope Valley, which is about 75 miles away.

Shriver also advocated for a citizen oversight committee to monitor and bring reform to the LA County Sheriff’s Department and a cleaner local water supply.

Bill Carrick, who was a strategist for Eric Garcetti’s mayoral campaign last year, will be advising Shriver’s supervisorial race.

A voter-approved initiative, Measure B, was approved in 2002 and curb limits for supervisors to three four-year terms (12 years).

Yaroslavsky was elected to the Board in 1994.

In addition to Yaroslavsky, Molina is also termed-out this year.