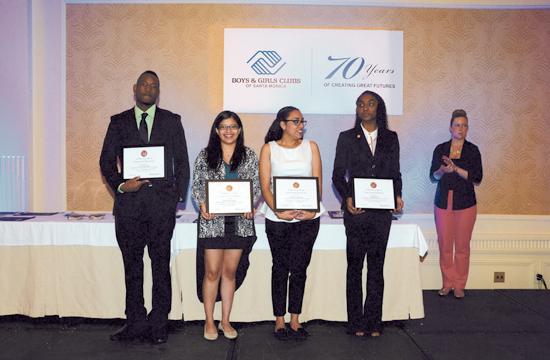 Enthusiastic cheers and claps filled the ballroom of the Fairmont Miramar Hotel on Saturday afternoon as the Boys & Girls Club of Santa Monica held its 46th Annual Youth of the Year Awards Ceremony.

Sponsors, supporters, family members, and friends of club members welcomed the youth as they entered the front doors with a red carpet-esque setup that led to the ballroom.

Creating an atmosphere in which the members were truly the celebrated focal point, the event’s positive energy embodied the mission statement of the Boys & Girls Club: “to enable all young people to reach their full potential.”

More than 100 guests attended, including representative youth and club facilitators from each of the 11 Santa Monica Boys & Girls Club branches.

Any club member who had received a Youth of the Month award at their local branch was invited; from this pool of youth, one member was selected to be Youth of the Year of their respective branch.

The overall Youth of the Year recipient was selected from this group of finalists.

Next, he asked all of the nominees to stand and be recognized, again emphasizing the main reason as to why this annual ceremony exists in the first place.

With Deb Carson of Fox Sports Radio as the emcee and Santa Monica Police Chief Jacqueline Seabrooks as the Keynote Speaker, the afternoon flowed smoothly.

As a part of her speech, Seabrooks recited a poem about childhood, allowing the audience to reflect on the concept of youth and their own personal resonance with it.

“There is in every person’s heart the love of wonder,” Seabrooks read. “You are as young as your faith and as old as your doubt.”

With Seabrooks’s poem as an appropriate opener, the awards ceremony commenced.

Each club branch in Santa Monica welcomed their monthly award winners onto the stage before announcing the yearly award from each group.

Each department of the Main Branch, including the Athletics Department, Technology Center, Art Shop, and Social Recreation, followed suit and announced one selected youth from each division. Then, the winning youth from four different age groups (6-9 year olds, 10-12 year olds, 13-15 year olds, and 16-18 year olds) were presented their respective awards. Every child excitedly held their plaques and certificates to the audience, eagerly posing for pictures and smiling at their family members.

As for the grand finale, Gabriela Hernandez, a senior at Palisades High School, was awarded the coveted title of the 2014 Youth of the Year. She was crowned the overall winner out of a group of three other nominees (Geanna Grammatico, Aemoni Harris, and Tayon Blockmon). The finalists all attributed the bulk of their success to the help and support of the Boys & Girls Club.

Each of the 2014 Youth of the Year nominees was also given a surprise gift at the ceremony – $4,000 in college scholarships, with an additional $4,000 given to Hernandez.

Hernandez has attended the Boys & Girls Club for the past seven years. She currently serves as the President of the Keystone Club.