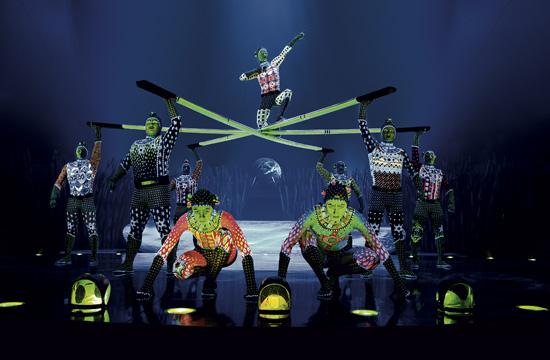 The family-friendly show traces the journey of the human species from its original amphibian state to its ultimate desire to fly. The word “totem” contains the idea of the order of species.

Located in the north beach parking, the tent was raised last Thursday afternoon followed by the installation of the stage, bleachers, and amenities.

“We use a good portion of them to set up the big top as well as tear it down,” Lund said. “We hire locals during the run of the shows to work as ushers, in the box office, and at food and beverage stands.”

Lund, who has previously worked on Cirque’s “Mystere” and “KA” productions in Las Vegas, said “Totem” was a great family show.

“It brings back the essence of Cirque,” Lund said. “It’s got the strong acrobatic elements. Anyone can come and have a great time; it really inspires people. There’s great music and great costumes.”

“Totem” arrived via 65 trailers, carrying more than 1,200 tons of equipment.

Since its world premiere in 2010, more than two million people worldwide have seen the show, which was winner of the 2013 Drama Desk Awards for Outstanding Unique Theatrical Experience.

Featuring a cast of 46 acrobats, actors, musicians, and singers, “Totem” is described an uplifting array of athleticism, comedy, heartfelt emotions, and visual effects.

General admission adult tickets are available starting at $55 ($45 for children 2-12, $50 students 13+ with ID/seniors) at www.cirquedusoleil.com/totem.