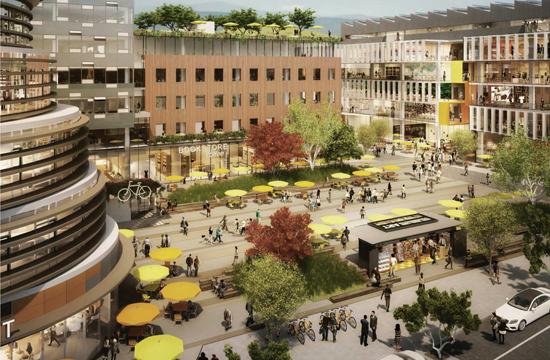 The fate of a controversial development agreement (DA) considered to be the largest ever in Santa Monica at 1681 26th Street and would transform a portion of Bergamot Station into combined commercial, residential, and transit neighborhood is still up the air as the City Council held off on deliberating the matter until Feb. 4.

Despite five hours of presentations and public testimony on Tuesday night, which included an estimated 120 speakers, the council decided to continue deliberating the Hines DA proposal next week in order to allow them to address the many issues raised.

Mayor Pam O’Connor announced early Wednesday morning – at 12:45 am – the Hines DA agenda item would tabled, meaning the estimated 200 people who filled City Hall for the council’s Jan. 28 meeting left without knowing whether or not the project would move forward.

The presentation of Hines’ proposed DA at the council’s Jan. 28 meeting has been highly anticipated since it was confirmed the issue would be on the agenda. City staff, anticipating significant community input, did not place any other substantive action items on this week’s agenda.

Prior to the Hines DA item, the council only deliberated its consent calendar and voted on a small number of second readings.

When the City Clerk finally called the proposed DA, City staff and the applicant – Hines 26th Street LLC – made about 90 minutes of presentations to the council, touting the project’s benefits, designs, and specifications.

The remainder if the evening was dedicated to public input.

Many speakers who spoke in opposition to Hines’ proposed project expressed concern over gridlock, emergency response, affordable housing, and design.

Those who spoke in favor said the proposed project would provide economic benefit to Santa Monica and could be a model for future transit-oriented projects.

One speaker told the council people might be underestimating the positive impacts the Expo Line would have on the area immediately surrounding the Hines project and Bergamot Station. Another speaker said he lived in Santa Monica since 1976 and there are definitely local residents who supported the project.

“This will be the right project for this City at the right time,” he said.

On the other side of the spectrum, the question of Hines’ contributions to Mayor Pam O’Connor’s election campaign was brought up during public comment. City Attorney Marsha Jones Moutrie confirmed the campaign contributions were legal. However, no legal authority was cited.

Another concern: traffic and gridlock. Many speakers warned the council if Hines’ proposed project is realized, it would bring more gridlock to Santa Monica. Even more, opponents claimed the proposed project would not be able to mitigate the additional traffic.

Many who opposed the proposed DA cited these statistics to support their respective cases of why Hines should not be allowed to move forward with its plans. One speaker estimated Hines’ proposed project could potentially impact traffic three miles away.

“Implementation of the proposed project would conflict with an applicable plan, ordinance, or policy establishing measures of effectiveness for the performance of the circulation system, taking into account all modes of transportation including mass transit and nonmotorized travel and relevant components of the circulation system, including but not limited to intersections, streets, highways, and freeways, pedestrian and bicycle paths, and mass transit,” an entry in the EIR stated. “This is considered a potentially significant impact. Implementation of mitigation measures would reduce this impact, but not to a less-than-significant level. Therefore, this would be a significant and unavoidable impact.”

Other concerns included potential strains on the local water supply and whether the proposed project includes sufficient affordable housing units or other community benefits.

Some questioned the proposed development’s size and design. One speaker said the project’s proposed design was “unimaginative.”

Yet another concern: how would first responders be able to respond to emergency during rush hour traffic with potentially more gridlock than what currently exists in Santa Monica with the addition of the Hines project.

Planning Commissioner Jennifer Kennedy, who spoke on her own behalf, expressed some concerns about the project. Specifically, she focused on the possible subdivision of parcels and the potential impact such subdivisions would have on floor-area ratio.

Sue Himmelrich, also on the Planning Commission but speaking to council members as an individual, said the project’s affordable housing is not sufficient.

Feinstein added the location of the proposed mixed-use development – the former Papermate site near the intersection of Olympic Boulevard and 26th Street – is across from the Water Garden, which he said already generates a high number of vehicle trips and has an unfavorable ratio of employees who live out of Santa Monica versus those who live within city limits.

If approved in its current form, the proposed Hines project would bring 473 rental housing units, 25 artist work/live units, and an estimated 400,000 square feet of creative office, restaurant, and retail space to Olympic Boulevard and 26th Street.

Also proposed is about 90,000 square feet of open space, a three-level subterranean parking structure accommodating between 1,900 and 2,100 parking spaces, the construction of two new north/south streets with signalized intersections at Olympic Boulevard, and an east/west extension of Nebraska Avenue connecting 26th and Stewart Streets.

The proposed project’s five buildings would average 71 feet in height, with the tallest building reaching 81 feet, according to the final EIR.

Also according to the final EIR, the proposed project would require the removal of coral trees in the area. The report describes the trees as a “recognized scenic resource.”