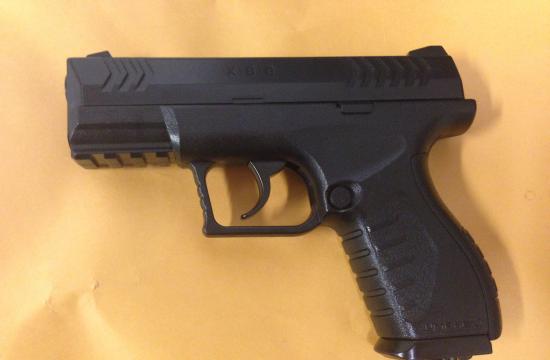 A 20-year old film student from Valencia was arrested in Malibu on Thursday for removing the safety tip from an imitation firearm as part of a shoot for a school movie.

A Malibu sheriff’s deputy was flagged down at about 10:30 am Thursday and told that a male suspect was waving a handgun near other people close to Point Dume Nature Preserve.

During a coordinated area search including the nearby cliffs, deputies soon saw a suspect pointing a handgun at the head of a young woman who had her hands raised in the air at Little Dume Beach in Malibu.

A person nearby was holding a camera and filming them. Other people were in the area.

Malibu sheriff’s deputies and park rangers detained the suspect and six other people on the beach.

An examination of the realistic looking gun revealed it was a replica handgun with the orange plug tip removed. The orange tip was installed by the manufacturer to ensure people would know it was not real.

The group said they were college film students shooting a movie for school.

Authorities said no notice had been given to law enforcement, there was no film permit, there was no security, and no signs indicating it was a film project, and for the public not to be concerned. The suspect said the orange plug had been removed to make it look like a real gun.

The Valencia man was arrested for a misdemeanor, Removing the Safety Tip from An Imitation Firearm, violation of California Penal Code section 20150(A).