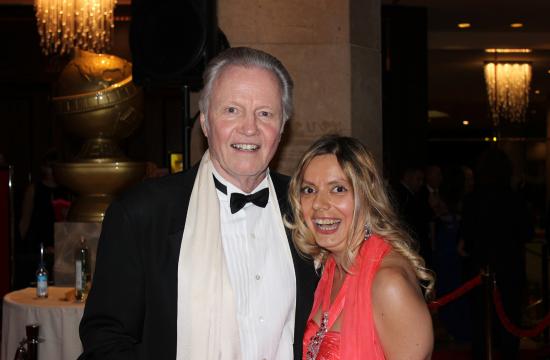 Perhaps the most accessible show of the awards season, the 71st Annual Golden Globes did not disappoint Sunday night, as film and television stars, along with their supporters, friends, and fans all rubbed shoulders to celebrate last year’s accomplishments.

The awards and winners were diverse to be sure, from the pre-civil war true story “Twelve Years a Slave,” which took Best Motion Picture, Drama award, to “Gravity”, the outer space thriller that garnered Best Director honors for Mexican native Alfonso Cuaron.

The evening also saw veteran stars back in the spotlight, with Michael Douglas winning Best Actor in a Mini-Series or TV Movie with his turn as Liberace in “Behind the Candelabra.”

And Jon Voight, who last won a Golden Globe for 1986’s “Runaway Train,” happily posed for photos in the Beverly Hilton Hotel lobby, as he held his latest award, this time for Best Supporting Actor in a TV Series, Mini-Series or TV Movie for the Showtime series “Ray Donovan.”

After the ceremony, actors, directors, friends, and guests lingered at the Beverly Hilton Hotel, as they celebrated and danced the night away at the after parties.

This year’s mingling went a golden step further, and saw winners and hopefuls to the Olympic games posing for photos at the NBC/Universal/Focus Features/E/Chrysler after party (and yes, the room was as crowded as the number of sponsors).

There, actors became the fans as they posed with the likes of swimmer Jessica Hardy (Gold and Bronze medals at the 2012 Olympics in London) and Olympic hopefuls, such as local USC All-American swimmer Jack Wagner (looking towards the 2016 games in Rio).

The Mirror caught up with Santa Monica’s Dr. Marie Paquim, who is slated to star in and shoot her epic thriller on human trafficking “Land of the Free, Except for Me” this year.

Tonight, like many others, she was happy dance to the DJs music, and celebrate a great year of performances with fellow actors, chatting it up with Golden Globe winner Jon Voight and her friend, “Once Upon A Time” actress Lana Parilla (“the evil queen”).

Dr. Marie Paquim and Lana Parilla, not unlike the rest of the procession of actresses being caught in the camera flash, were both dressed to impress, with out of this world gowns sweeping trails behind them (and which were skillfully pulled along just in time to avoid the steady stampede of foot traffic).

Observed Paquim of the evening’s fun: “It’s a celebration of artists, and I was so proud and happy for ’12 Years a Slaves’ win,'” and added with a laugh, “though I didn’t like much when people stepped on my dress!”

More awards shows are on the way, with the prestige of the Oscars looming on Sunday, March 2. The Golden Globes certainly will be hard to beat as a both a fan and award winner’s favorite.