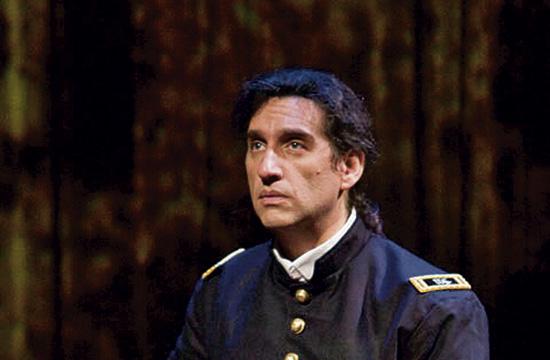 Hershey Felder has carved out a very successful career in the United States and Europe as a composer, musician, and actor, primarily known for his one-man shows that embody some of the greatest composers including Chopin, Beethoven, Liszt, Leonard Bernstein, and the award-winning “George Gershwin Alone” for which he received a Los Angeles Ovation Award for Best Music and Best Actor. But alas, even the most feted must sometimes fail as did his last production, “Abe Lincoln’s Piano,” which just closed after a limited run at the Geffen Playhouse.

Based on the music of Stephen Foster, the play was akin to sitting through a rambling, boring lecture on the circumstances immediately following President Lincoln’s assassination by John Wilkes Booth at the Ford’s Theatre. In the first half hour or so, Hershey gives an autobiographical profile of the genesis of his piano playing which apparently began as a young child of eight in Montreal when, after experiencing someone playing the piano, demanded that his mother buy a piano and arrange for lessons.  One cannot dispute the fact that Felder is a most accomplished pianist and that his relationship with the piano is definitely an extension of his body. But where was the story about Lincoln, I kept asking myself and do we really need to know about Felder’s childhood, which seemed rather self-indulgent.

Impatience finally unsatisfactorily paid off, as it was slowly revealed that following a performance at Ford’s Theatre in Washington, D.C., and his subsequently playing Lincoln’s piano at the White House, Felder became intrigued with the president’s assassination and specifically to a private accounting by Dr. Charles Augustus Leale, a young Army surgeon who ministered to the mortally wounded Lincoln.

In 1909, at the age of 90, Leale finally broke his silence about his experience. Hershey, taking some theatrical license with Leale’s material, as the good doctor, cradles Lincoln’s head in his arms and breaks out in song, singing “My Old Kentucky Home.”

So, now we know the ensuing, rather disjointed narrative, punctuated with a sprinkling of famous American music compositions from great composers such as Steven Foster, Louie Gottschalk, and George Gershwin, the “lecture” will be presented through the eyes of the unsung Lt. Leale. At one point in Act 2, Felder did not miss an opportunity to bang out that evergreen, Gershwin’s “Rhapsody in Blue,” always guaranteed to garner an audience’s wild approval.

The narrative was clumsy, as was Hershey’s acting, as he introduced a variety of characters, trying to change his tone, pitch, and inflection in his singing and speaking voices, but the alteration in the sound was barely perceptible and all of characters bled into each other resulting in almost all of them sounding the same. What was truly lacking were fully actualized characterizations with inner lives and subtext.

The credit or blame for this production must be equally shared by Felder, who wrote the book and certainly by the director Trevor Hay who failed to reign in and shape the disjointed narrative which should have been a cohesive journey through one of the most horrendous, murderous acts in American history. Hay also failed to elicit the kind of strong performance from Felder that he has exhibited in his previous one-man shows.

When a poor play gets a standing ovation, as a critic, it falls under the heading of “what??”  So, despite it’s approval by the audience the night I attended, I must be a “spoiler” and declare that the emperor was, indeed, not wearing any clothes.