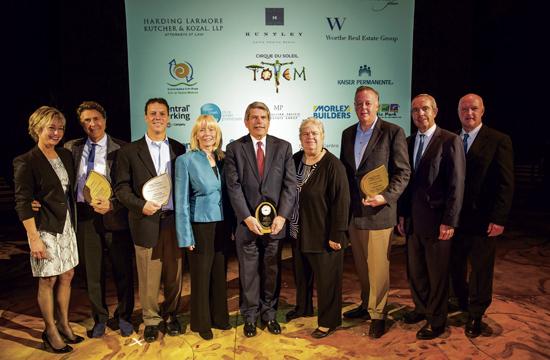 Sometimes the politics of Santa Monica can be described as a circus. Then again, this year’s State of the City, hosted by the Santa Monica Chamber of Commerce, was quite an efficient affair as key dignitaries and leaders filled Cirque du Soleil’s big top tent Monday morning to honor business, economic, and political trendsetters.

Over the course of about one hour, an estimated crowd of 800 people collectively congratulated four people who were honored for various contributions to Santa Monica, including outgoing County Supervisor Zev Yaroslavsky. In addition to the awards, Santa Monica Mayor Pam O’Connor delivered her State of the City address.

A key proponent of the development of the Expo Light Rail, Yaroslavsky was honored with the Community Excellence Award for his efforts to expand public transit in Santa Monica and the surrounding region.

Honored with the Economic Excellence Award was Cirque du Soleil’s Guy Laliberté. Laliberté was not in attendance – the award was accepted by Jerry Nadal, Cirque’s senior vice president of resident shows. The acrobatic themed circus has been a Santa Monica mainstay since 1984 and has been an economic boon to the City.

Perry’s At The Beach has various locations on Ocean Front Walk and offers beach rentals as well as cafés.

The award recipients reflected overall theme of this year’s State of the City: Santa Monica is home to a storied past and a bright future.

In her address, O’Connor reminded people the key issues facing Santa Monica’s businesses and residents, as reflected by the many headlines in the local newspapers of the day, was airport noise, traffic, and parking.

Still, O’Connor said Santa Monica’s future remains bright. For example, she cited the role of the City’s business community in providing a large tax base as the reason why Santa Monica is a leader in primary education and services to residents.

She said Santa Monica is “poised for growth” in key industries such as entertainment, healthcare, hospitality, and healthcare.

Also the wave of the future: transit-oriented development, such as the proposed Hines project at Bergamot Station. Coincidentally, a council vote on the Hines proposal was delayed until Feb. 4.

At the outset of the event, Santa Monica Chamber of Commerce’s President and CEO, Laurel Rosen, and Chairman, Brad Cox, provided welcoming remarks.