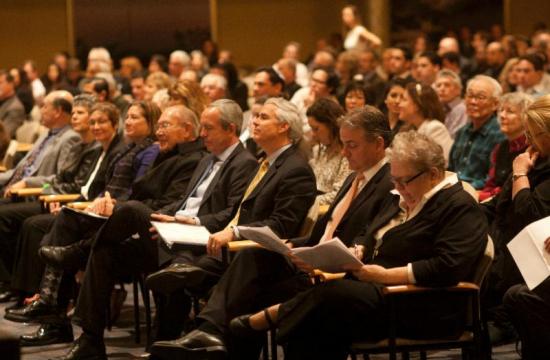 The Santa Monica Chamber of Commerce presents the 2014 State of the City this Monday, Jan. 27 at a special location – under Cirque du Soleil’s Grand Chapiteau (Big Top) next to the Santa Monica Pier.

Hear first-hand from the City Manager Rod Gould, Mayor Pam O’Connor, and community leaders as they speak about the current state of Santa Monica and what the future holds at the annual State of the City breakfast networking and educational event.

Each year, this event brings together the business and resident community and city government leaders to learn about initiatives impacting the city.

The event’s focus this year is Global Visionaries and local leaders in Santa Monica.

Each year a committee of business and community leaders honor individuals and organizations that have contributed to the economic success of our city while demonstrating commitment to community wellbeing through social, humanitarian, or environmental leadership.

This year’s Economic Excellence Award will be presented to Cirque du Soleil, coming to Santa Monica for 30 years, this year with “Totem.”

Adam Miller, CEO of Cornerstone OnDemand, and Richard Chacker, founder of Perry’s on the Beach, will each receive Innovation Awards.

Enjoy a delicious zero waste breakfast and networking opportunity from 7 am to 8 am and the program, which will take place from 8 am to 9 am.

You’ll be receiving special recognition at the State of the City, can you talk a little about what you have done to be recognized as a leader and innovator in our community?

I suspect that this sort of honor is largely a recognition that I have survived nearly four decades as an elected official in Los Angeles County. I suppose that’s worth some recognition.

The building of the Exposition Light Rail project, which will open to Santa Monica in less than two years, will be the single most important transportation improvement in our area since the building of the I-10 freeway half a century ago.

The refurbishment of the Santa Monica Courthouse and its jury room has become the model for the rest of our court system. Promoting clean water and clean beaches has served to protect and enhance on of this region’s most important economic and environmental resources. These are among the things that I would single out as the byproducts of the County/Santa Monica partnership.

What do you think is important for local politicians to do to stay ahead of the trends and maintain active engagement to build on success or achievements?

Successful local politicians are those who keep their finger on the pulse of their constituents; who are accessible to the broad spectrum of stakeholders who make up a community; who can walk a mile in the shoes of those petitioning their government; and who act wisely and decisively in the interest of all the people.

I have been guided by an quote from the 19th Century British historian, Lord Thomas Macaulay, who once wrote: “No man is fit to govern great societies, who hesitates about disobliging the few who have access to him for the many he will never see.”

Any politician who follows that adage will do well.

The Chamber is a representative of business and commerce, but it has to be more than that. A clean environment, a rational development plan, and an effective transportation system are all in the best interests of the economy of a city – especially one like Santa Monica. This city is popular because of its location, its beauty and its livability. The City and the Chamber must be partners in protecting those assets, which make this place as attractive to business as it is.

You’ll be receiving special recognition at the State of the City, can you talk a little about what your company has done to be recognized as a leader and innovator in our community?

When we launched Cornerstone more than 14 years ago, people questioned our decision to bypass Silicon Valley and New York in favor of starting a tech company in Santa Monica. But it’s turned out to have been a great decision.

Not only has Cornerstone had the most successful tech exit in the city’s history, but we are now considered one of the fastest growing cloud software companies in the world, with a nearly $3 billion market cap.

It’s exciting to see how the Los Angeles region – and Santa Monica in particular – is quickly gaining ground as one of the fastest growing technology hubs in the country, and we’re proud to be playing a leading role in helping to bring further unity and awareness to this emerging start-up ecosystem.

For example, we hosted the first annual LA Tech Summit last year, which brought together 900 leading executives, entrepreneurs and professionals in Santa Monica, and gave the community an opportunity to shine the spotlight on why the region is a thriving center for entrepreneurship and technology start-ups.

We also launched the Cornerstone Innovation Fund, a strategic initiative created to invest in, advise and collaborate with promising cloud start-ups in Los Angeles, as well as other technology communities throughout the world.

What do you think is important for your company to do to stay ahead of the trends and maintain active engagement to build on your success or achievements?

At the heart of any company’s success, and ours in particular, are its people. As Cornerstone continues to grow rapidly, it is important to intentionally preserve our employee culture and start-up mentality; otherwise, it will be inevitably lost.

Whether it is visiting our headquarters in the Water Garden or meeting our team members at local events, you immediately get a sense of what makes Cornerstone employees unique.

We’ve been able to sustain this through hyper-growth because, from day one, we put the necessary architecture, processes, and programs in place to support and measure our core values (Smart, Cool, Dependable, Visionary) and drive a culture by design rather than default. This culture has been a key to our success and innovation, and it’s something we’ve been able to foster on a global scale.

We should support the universities in the immediate area to help develop the type of tech-centric talent that will be needed to propel the ecosystem forward. It’s also important to attract further funding/investment for Santa Monica and Los Angeles startups from both inside and outside the region.

Finally, we need to continue to build on and support the positive momentum this city has seen as a legitimate tech hub – whether it’s building awareness through events like the LA Tech Summit, college job fairs or community gatherings like the State of the City.

You’ll be receiving special recognition at the State of the City, can you talk a little about what you have done to be recognized as a leader and innovator in our community?

Perry’s has really been all about change. We’ve been on the beach for 37 years as a major contributor to Santa Monica beach culture from volleyball, outside seating, and across the board beach rentals – none of these things were here when we started. We also have a massive outreach program not only in the local community but the international community. That outreach program we’ve overlapped with the CVB to bring international guests and local guests to our community. Some of the new innovations that we’re going to be bringing is adding a beautiful awning enclosure to the 2400 location at the end of Hollister that will enhance the ambiance and create a more comfortable year-round destination.

The last thing as far as innovation goes, we’re working with the City right now to create a beach shuttle that will pick up people from all around the community, hotels etc, and bring them down to the beach and then take them back to their point of origin and that will all be free. We don’t really have anything that does that in the community. We thought that would be a good innovative idea.

What do you think is important for your company to do to stay ahead of the trends and maintain active engagement to build on your success or achievements?

If your not innovative, then you quickly become passé. This is a highly competitive world and competitive city we live in. Those who are static fall behind. We’ve been a major contributor to the beach culture for the whole time we’ve been there.

That diversity will give our community a better chance at success.

The City has a much more complex charge: to find the symbiosis and equilibrium of all competing interests. I think the City does an exemplary job of soliciting as many different opinions when trying to come up with the best recommendations and solutions. The City is in a turbulent time torn between growth and development and what some see as the degradation of the quality of life. The city at all costs much maintain the quality of life that has for so many years been why we all love Santa Monica so much. Watch, look and listen and good luck to the City and to all of us because we all want what is best for the City.