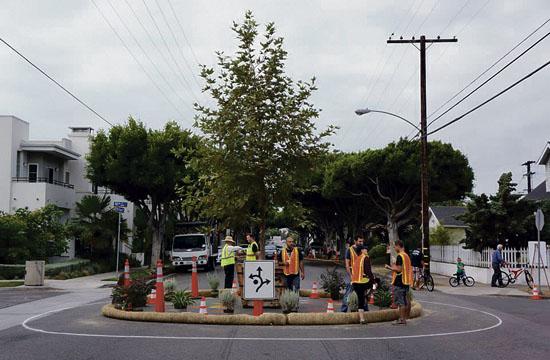 Santa Monica residents will have a first crack at taking part in the public process in 2014 when City Hall hosts a meeting Tuesday, Jan. 7 to present the conceptual plans of an ambitious “green” project planned for Michigan Avenue between the beach and Bergamot Station.

Concept designs will be on display for community input and discussion Tuesday evening at Virginia Avenue Park. The Jan. 7 community meeting will begin at 7 pm.

According to the City’s Planning Department, MANGo is intended to create an inviting streetscape along Michigan Avenue and adjoining streets.

“The three-mile Greenway between the Bergamot Arts Center and the beach would provide a safe and comfortable place for neighbors of all ages to walk, bike, recreate, and interact with one another,” City staff stated. “Additionally, it will be a functional circulation link to connect residents and visitors with many significant community and regional institutions, including schools, parks, job centers, and future Expo stations.”

If MANGo is realized, the City Hall hopes the project will make it easier for Santa Monicans to get around town by bicycle or on foot. City Hall also hopes to “enhance the livability of the Pico Neighborhood and improve environmental quality,” according to the Planning Department.

Planning efforts for the Michigan Avenue Neighborhood Greenway were launched in early 2013 and are generously funded by a Caltrans Environmental Justice Grant.

At a Planning Commission meeting in August 2013, the project was well received overall but a few questions were posed.

For example, commissioners pondered how MANGo would impact permit parking along Michigan Avenue.

One logistical question: would parking spots along the street allow for parallel, angled, or perpendicular parking. The answer to the question could impact how bicycles and vehicles interact with each other.

Similarly, another concern was whether MANGo would result in the loss of vehicular parking to accommodate wider sidewalks or more space for bicycle traffic. Any loss of vehicular street parking could potentially impact Michigan Avenue residents.

Funding was also a concern meaning construction could be delayed. Metro funding, for example, might be five or six years away.

Another issue raised by commissioners and residents alike was the volume of traffic on Michigan Avenue, something the Greenway hopes to address.

As for the actual concept plans, the Michigan Avenue Neighborhood Greenway entered into the City’s lexicon in light of principles presented in the Land Use and Circulation Element (LUCE) and the Bike Action Plan.

Consistent with the project’s name, the proposed Greenway, according to City staff, “primarily travels along Michigan Avenue, with a beach connection on the west end and connections to Bergamot Arts Center and the Expo bike and pedestrian path on the east end.”

City staff added the project is a key component of the No Net New Trips strategy as outlined in the Land Use and Circulation Element (LUCE).

If realized, City staff stated MANGo would serve several local communities, including young and senior residents as well as commuters who rely upon walking, biking, and/or transit to get to work.

More information about the project may be found at www.smgov.net/michigan or by contacting Jason Kligier at 310.458.8341 or jason.kligier@smgov.net.

Tuesday evening’s community meeting is anticipated to run until 8:30 pm.

A workshop for the MANGo project was previously held in December 2013. In September 2013, more than 400 people reportedly attended a community festival along Michigan Avenue to view temporary installations of the project’s potential elements.