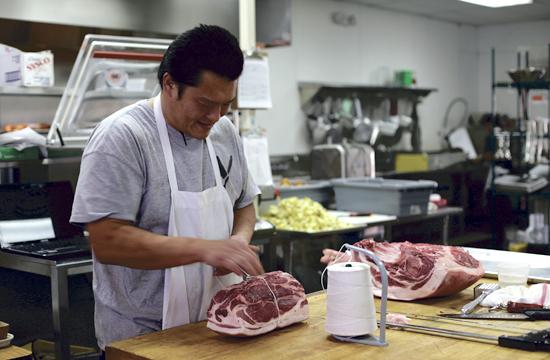 After opening its doors to the public in mid-December, A Cut Above has drawn attention for its quality meats as well as a wide range of options for its customers.

The owners are accompanied by a staff of young chefs, workers, and servers, who add on to the modern atmosphere. The shop also doubles as a deli, with some seating available for those who decide to purchase one-time meals instead of cuts to take home.

Shin was gracious enough to take some time out of his day’s work to sit down – and still considerately leaped up to attend to his customers immediately when needed – and elaborate on the concept and purpose of A Cut Above.

He had visualized this kind of shop for about four years, Shin explained. He has on his belt years of experience as a chef at a steakhouse prior to the opening of the butchery. Fortunately, Andrew and Cindy Yoon were good friends of his who were able to collaborate and take responsibility for the conceptualization and the funding of the butchery.

What catalyzed their motives to establish A Cut Above was the fact that independent butcher shops are increasingly becoming a rare sight. The butcheries in supermarkets tend to be operated by those who may not necessarily specialize in meat, which Shin became concerned about. What A Cut Above offers is exactly what is lacking in much of Santa Monica today: not only a butcher shop that sells custom-cut, high quality meat with no preservatives or antibiotics, but also a “neighborly” place that locals can frequent. Their “regulars” already come in four to five times a week, indicating the convenience of the location of the shop as well as its reliability.

Another unique component of A Cut Above is the level of catering it provides to all kinds of customers. Though those in line seemed to be young adults, passersby peered into the windows, curious as to see what kind of butchery this was.

Shin noted that customers who hail from the East Coast comment that the shop reminds them of their childhood and of the “old school butcher shops” of Brooklyn, a stark contrast to most California natives who grew up in meat departments and supermarkets. It’s no surprise that A Cut Above triggers this nostalgia of authenticity, as Shin explained that the shop “brings in the whole animal,” making it possible for the customer to request any cut and size of the meat. A Cut Above is also planning on establishing vegetarian menu options, which, as ironic as it seems, further proves its dedication to any and all customers.

This butcher shop seems to have achieved a sort of paradox: it successfully incorporates a surface-level modernity with its youthful staff and trendy interior design, but also maintains an “old school” butchery foundation with its solid customer service and dependable quality of meat.

A Cut Above is located at 2453 Santa Monica Boulevard, adjacent to the CVS plaza. For more information, visit acabutchershop.com or call 310.998.8500.