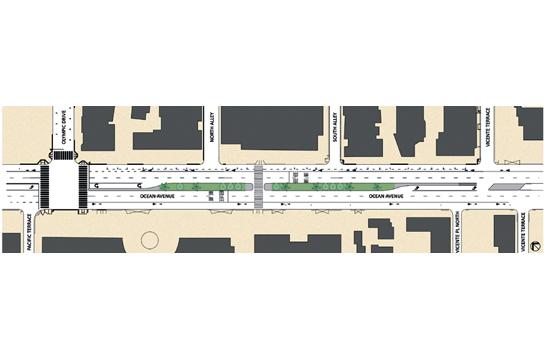 As if driving around Santa Monica was not already tough enough as it is, City Hall announced this week a portion of Ocean Avenue will be under construction for up to four weeks starting Jan. 21, complete with lane closures.

However, City Hall hopes the completion of a raised and landscaped median along Ocean Avenue at the end of construction will help make the area safer for cyclists, drivers, and pedestrians. The City also hopes the new median will improve the street’s “walkability.”

The median, once complete, will extend along Ocean Avenue between Olympic Drive and Vicente Terrace.

According to City staff, the median is a “required safety enhancement of the Civic Center Village Residential Project Development, and is a key part of the implementation of the 2005 Civic Center Specific Plan.”

Plans for the median call for it to be 10 feet wide and be built along Ocean Avenue south of Olympic Drive. The median is to be designed, according to City staff, “to reduce the scale of the street, and to allow for distinctive planting that reinforces the identity of the Civic Center.”

The plan to build the median was originally included in the 1993 version of the Civic Center Specific Plan and remained incorporated in the updated document 12 years later. In that time span, City staff stated, “All phases of the plan have included numerous workshops and periods of public input.”

The median took one step closer to reality when the Civic Center Village Residential Project development agreement was approved in May 2008.

“The agreement included a requirement that the developer would construct the raised median,” City staff stated. “The city regularly installs raised medians in order to improve pedestrian safety, particularly along major streets and boulevards.”

When the median is completed – potentially in late February – drivers will no longer be able to make or complete left turns into or out of a driveway from both sides of Ocean Avenue.

City staff continued: “Southbound traffic will be able to make a left turn or U-turn at the southern end of the median at Vicente Terrace in order to travel northbound on Ocean Avenue and access streets and driveways on the east side of Ocean Avenue.”

Pedestrians will be able to cross Ocean Avenue at one of two crosswalks: one in front of the Le Merigot Hotel at 1740 Ocean Avenue; and a second crosswalk at Ocean Avenue and Olympic Drive.

A public meeting is set for Jan. 13 at the East Wing of the Civic Center to discuss the median project and its implications. The Civic Center is located at 1855 Main Street. The meeting will run from 7 p.m. to 8 p.m.; City staff will make a brief presentation about the project and answer questions.

More information about the project can be found at www.smgov.net/pcd.