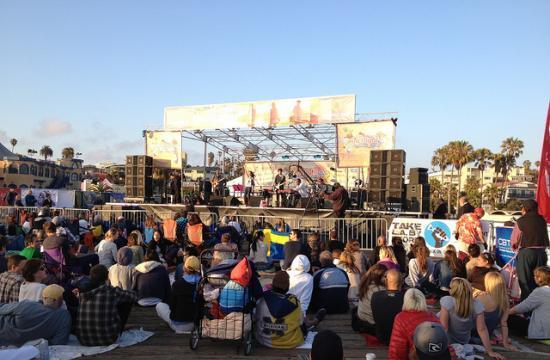 Changes are in store for the Twilight Concert Series (TCS) courtesy of a one-year pilot program unanimously approved Tuesday night by the Santa Monica City Council.

In its first public meeting of 2014, the council authorized several key changes to the TCS in hopes to making the event safer for attendees.

The pilot program would also “reposition” the TCS this year in order to make the event more community-based.

All seven council members in attendance approved a scaled down TCS for 2014, which would do away with the jumbotron for the event’s attendees on the sand but maintain the speakers, allow for the stage position to be altered or moved while mitigating sound impacts on local residents, and give the City some flexibility with signage on the pier in order to allow for more sponsorship opportunities.

City Manager Rod Gould made it clear Santa Monica has no intention to scrap the TCS but instead is aiming addressing public safety concerns.

The goal, he said, would be to shrink the event’s footprint to ensure public safety but still provide attendees with an entertaining experience despite a scaled-back TCS.

“This is a 30-year tradition in Santa Monica,” Gould told council members. “I want to make very clear … this is not about recommending elimination of a beloved tradition. It is raising serious public safety issues. What we’ve noticed in the past year or so is we are beginning to attract large crowds, many larger than any had seen for years before. Our goal is to right size this concert series over time without diluting its quality (and) its impact.”

Gould pointed out the 10 concerts during the 2013 TCS averaged 15,000 people, with an estimated two-thirds of them congregating on the sand surrounding the pier. The largest concerts drew anywhere between 20,000 and 30,000 attendees, Gould stated.

One recommendation made my Gould and City staff: have the TCS focus on emerging talent instead of national or mainstream audience, therefore not attracting crowds of 20,000 or 30,000.

“When it gets that size, we have very serious public safety concerns,” Gould told council members. “We must make certain that our police officers, our paramedics, our firefighters, (and) our harbor guards are able to intercede in case of emergency rapidly and effectively. When the crowds get that large, it becomes highly problematic.”

“Staff feels very strongly that we need to move back toward the original conception of the Twilight Concert Series and that it be community-based, and on the pier,” Gould said. “Yes, there would still be people on the beach, but the focus of the activity would be on the pier and the marketing would be Santa Monica, Westside, local.”

Gould also suggested as part of a one-year pilot program the TCS not include a jumbotron and speakers for those attending the event on the sand. However, the council vote only did away with the jumbotron for 2014.

One side effect of making the TCS smaller in size: the Pier Restoration Corp. (PRC), which oversees the annual concert series, would have a more difficult time raising funds for the event. Accordingly, the City would have to subsidize about $200,000 to the PRC keep the event running.

Ferguson told council members the pier was not designed to be a concert venue, but the Santa Monica Fire Department would make certain adaptations to ensure people can still enjoy the TCS.

Ferguson added the capacity load for the entire pier is about 8,000. For the TCS, the Fire Marshall established an occupancy load of 4,742, which allows for chairs and standing room. For standing room only events, the occupancy load is set at about 6,000.

In addition to public safety, the configuration and layout of the stage and surrounding vendors would also be altered, the City staff report stated.

Gap funding in the amount of $200,000 to the Pier Corporation is recommended to mitigate some of the impacts of the framework. The City would likely incur additional public safety costs, depending on the scalable event plan.

The proposed pilot program also suggests TCS could focus more on local or emerging talent instead of established artists of national or international stature.

“One way to bring locals to the pier and create a sense of community is to create programming with a local interest,” City staff stated. “Booking emerging local talent, rather than a performer with established name recognition or a regional, national, or international fan base, would reinforce the TCS as a community-based event and likely draw a crowd that could mostly fit within the revised deck capacity. Targeting marketing efforts to Santa Monica and Westside-based communities and outlets would help draw people who live and work in the area.”