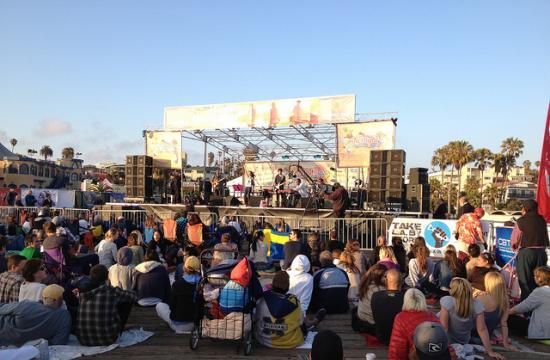 The beginning of any new year is ripe for resolutions and commitments to make change. In the spirit of 2014’s arrival, the Santa Monica City Council might resolve to alter the format of the ever so popular Twilight Concert Series (TCS).

A proposed pilot program is in front of the council to “reposition” the TCS this year in order to make the event safer and more community-based.

“The framework sets the capacity for the pier deck and a standard layout for events, refocuses talent and marketing to support a community-based event, ensures that signage conforms to existing law, suggests that some concerts occur without the jumbotron and beach speakers, and offers a revised layout for the beach overflow area,” City staff stated.

If the council approves the pilot program, capacity for a TCS event would be limited to about 4,700 people, City staff stated. According to the Fire Marshall, the capacity for the entire Pier is 8,020 people.

For non-TCS events, the capacity could be as high as 6,000 people, standing room only.

The configuration and layout of the stage and surrounding vendors would also be altered, the City staff report stated.

Specifically, the stage could be moved 50 feet to the east to allow for more space, while parking for the pier deck, tenants, and the disabled might be reduced from 99 to 21.

Gap funding in the amount of $200,000 to the Pier Corporation is recommended to mitigate some of the impacts of the framework. The City would likely incur additional public safety costs, depending on the scalable event plan.

The proposed pilot program also suggests TCS could focus more on local or emerging talent instead of established artists of national or international stature.

“One way to bring locals to the pier and create a sense of community is to create programming with a local interest,” City staff stated. “Booking emerging local talent, rather than a performer with established name recognition or a regional, national, or international fan base, would reinforce the TCS as a community-based event and likely draw a crowd that could mostly fit within the revised deck capacity. Targeting marketing efforts to Santa Monica and Westside-based communities and outlets would help draw people who live and work in the area.”

Off-premise signs would also be prohibited if the proposed pilot program is approved.

The jumbotron video screen allowing those physically on the beach to watch a concert on the pier deck might also be limited under the pilot program, allowing the City to control crowd overflow.

“While removal of the jumbotron for some of the TCS may not immediately and completely eliminate the beach overflow, removing it may reinforce the desired redirection of the event to the Pier, and doing so would provide important feedback for long-term changes,” City staff stated. “Over time it is expected that this pilot would cause event attendance to shrink.”

During TCS events, the beach area both north and south of the Pier might be reconfigured to give the Santa Monica Police and Fire Departments greater leverage to monitor public safety. Specifically, the beach areas surrounding the pier could be configured into six designated areas. More portable restrooms might also be added to the sand area.

The proposal recommends council members to authorize $200,000 in gap funding to the Pier Corp. to develop the new framework and allow the TCS to move forward this year.

The Mirror will report on how council members voted on this proposal in this week’s issue.