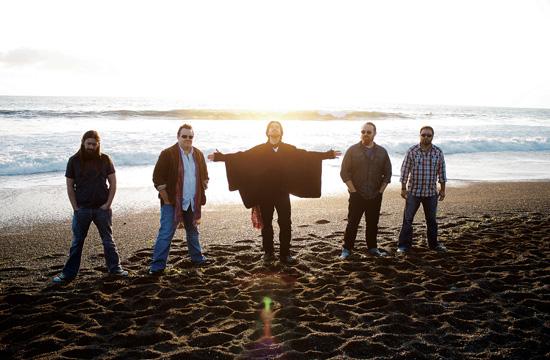 Tuesdays at Harvelle’s Santa Monica are unlike any Tuesday at any given blues club. The residency belongs to Hunter & The Dirty Jacks, a high energy, multi-dimensional bluesy, rootsy rock and roll band, who has transformed the way music gives back to the community.

Since January, the live music venue and the band have been hosting a weekly food drive, which in turn has fed thousands of people in need.

The concept for the weekly “Service Your Soul” night is simple: the $5 cover charge is donated to local non-profits Feed Your Soul and Magic Music Foundation. In lieu of the cover charge, two cans of food can are accepted.

The residency profits have paid for more than 2,500 meals that include barbeque chicken, mashed potatoes, baked goods, and salads, a caliber of food atypical of most shelters.

Band members themselves serve the meals, before a live acoustic set.

Band co-founder and drummer Jon Siembieda said Harvelle’s owner Cevin Clark approached the band about starting a residency after they had a successful show at the venue in November 2012.

“(Cevin) said ‘I really like you guys, I think you have something special.’ And after he offered the residency, we kept thinking, what are we going to do,” Siembieda said. “People only get motivated about feeding those is need during Thanksgiving or Christmas. Other than that, well it’s like, but what about March? What about every other month of the year? Hunger is a problem everyday.”

Santa Monica is known for having one of the highest homeless rates in the country.

According to the City of Santa Monica’s 2013 Homeless Count held Jan. 30, the count showed an increase in the total sheltered and unsheltered homeless population of one percent from 2012.

Siembieda said countywide, one of out five people in Los Angeles County lived in poverty.

He said the Los Angeles City Council is currently contemplating legislation that will make it illegal to give food to the homeless in public.

“You can’t count on the government to take care of the people that need help,” Siembieda said. “We have to do it ourselves.”

Through The Magic Music Foundation, music students of all ages and skill levels have received dozens of donated instruments as well as musical instruction from professional artists.

Using their music as a way to help the downtrodden aligns Hunter & The Dirty Jacks with the history of the blues.

“The idea is that we all feel blues, the soul of American music,” Siembieda said. “It once had meaning. These songs used to be about community and bringing people together. We want to play it for the people who need it. It’s doing good for no other reason than it’s the right thing to do.”

Clark said he and the band have enlisted the help of a major law firm to help them turn the club into a non-profit.

“We have prestigious law firm that took us on pro-bono,” Clark said. “They are going to do the formation of the non-profit. We are not sure if we can do it, but we have the best team doing the research and looking into it. If we can do it non-profit directly, we are looking into different avenues. We are not going to give up on creating a revolutionary idea that other companies can model.”

The Tuesday night two-fold serving has attracted praise from national and international recording artists alike who share their fan base to create awareness.

“A lot of good has come out of it, but a lot more could be done,” Siembieda said.

To help Harvelle’s and Hunter & The Dirty Jacks nourish those in need, visit “Service Your Soul” on Tuesdays at Harvelle’s at 1432 Fourth Street, Santa Monica.