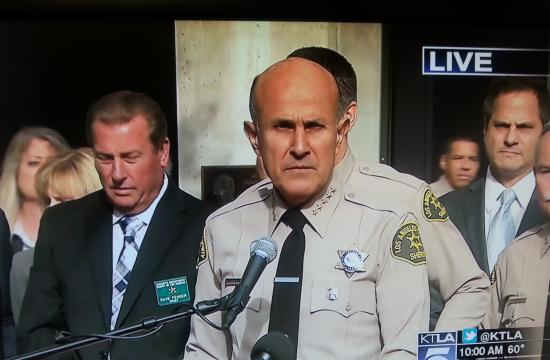 Los Angeles County Sheriff announced his retirement at a press conference Tuesday morning, ending a four-term tenure as the region’s top law enforcement chief. His resignation will be effect Jan. 31.

According to news reports, Asst. Sheriff Terri McDonald will manage the department until a new one is elected later this year. However, the Los Angeles Board of Supervisor will decide who will serve as the interim chief of the Sheriff’s Dept.

It has also been widely reported Bob Olmstead and Paul Tanaka would be top challengers for the Sheriff post when voters head to the voting booth Nov. 4.

McDonnell currently serves as the Chief of Police for the Long Beach Police Dept.

Baca, 71, was under scrutiny recently in light of an FBI investigation of alleged abuse of inmates and corruption within L.A. County jail operations. Specifically, allegations were reportedly made of Sheriff’s deputies using excessive force at Men’s Central Jail and Twin Towers Correctional Facility.

Prior to the Jan. 7 announcement, Baca had announced in 2013 he would seek a fifth term as Sheriff. This week’s resignation clearly ends his bid.

“I’m not going to seek election for a fifth term,” Baca stated at the press conference. “I will retire at the end of this month. The reasons for doing so are so many. Some are both personal and private, but the prevailing [reason] is a negative perception this upcoming campaign has drawn to the exemplary men and women of the Sheriff’s Department.”

A federal jury verdict found Baca liable for injuries suffered by an inmate in 2009, when he was apparently beat with excessive force by Sheriff’s Dept. officials.

In November 2013, a few hires made by the Sheriff’s Dept. came under scrutiny, such as giving his second-in-command sole discretion to make hiring decisions, according to one news report, and allegedly employing a pastor to an advisory position with a six-digit salary despite a reported connection to medical marijuana.

Other hires made by the Sheriff’s Dept. were reviewed in a Los Angeles Times report last month, revealing some employees had been hired with suspect behavior – some proven and others alleged. Some of the alleged and proven reported behavior of new Sheriff’s Dept. employees at other law enforcement agencies including cheating on polygraph tests, engaging in sexual acts at work, and soliciting prostitutes.

It was also reported last month Baca was facing at least 18 federal indictments.

Just before Christmas, Baca was at Santa Monica Airport to help the Los Angeles Vikings Charities Organization pass out food baskets filled with turkey and other trimmings.

In May 2013, Baca joined boxer Sugar Ray Leonard at a charity fight night on the Santa Monica Pier to help raise money for children fighting diabetes.

Baca succeeded Sherman Block as the Sheriff in December 1998. In all, he served the Sheriff’s Dept. for 48 years.

He was born Leroy David Baca in East Los Angeles in 1942 and served in the United States Marine Corps Reserve.