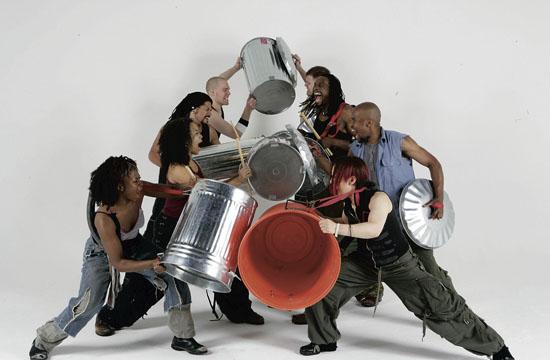 In a breathtaking display of percussive and movement virtuosity, this troop of young performers were mesmerizing with their astounding creativity in the recent production of “STOMP” that recently completed a sold-out run at the Saban Theatre in Beverly Hills.

Using ordinary inanimate household and industrial objects, the fun began with a performer sweeping the stage and in short order, one by one, was joined by the entire troop, each carrying a stiff bristle broom which they tapped in perfect, varying synchronizations, culminating in an orchestral rhythmic composition.

Interspersed with non-verbal comic interplay, and sometimes reminiscent of the powerful Japanese Drums, each segment used a different object to explore percussive sound, coupled with finger snapping, thigh slapping, and hand claps, in which the audience was sometimes invited to participate, filling the beautiful Art Deco Saban Theatre with an extraordinary cacophony of perfect rhythms and counter rhythms.

Under the brilliant, crack co-direction of Luke Cresswell and Steve McNicholas, who were the creators of STOMP, the ensemble, used their entire, agile bodies as musical “instruments” as they rallied around a steady stream of familiar props that aided and abetted new sounds accompanied by extremely energetic, acrobatic movements, some of which had the flavor of an African tribal dance.

Props such as radiator hoses became accordions and hubcaps morphed into crashing symbols.  Shopping carts, garbage cans, and paint cans were also utilized for different sounds becoming drums or other percussive instruments. The expertise of the troop easily changed rhythms and tempos from pianissimo (soft) to forte (loud). In perfect precision, the cast played an intricate game of toss using small paint cans, which crisscrossed across the stage and in another segment, the basketball toss, in which they perfectly executed the choreographed movements, again without missing a single beat.

You would never think of a newspaper as having musical possibilities, but in the hands of this amazing troop, reading or tearing or crumbling transformed the pages into yet another vehicle to create syncopated rhythms and counter rhythms.

While every segment was wonderful, there were one or two that were really standouts.  Each member of the troop came on stage wearing a “kitchen sink” and rubber gloves, which were used to make a scraping sound along the edges of the sinks. Splashing and scraping, once again rhythms and alternating rhythms, was quite entertaining, culminating in a unique and amusing way of both draining the sink followed by a stylized mop-up. The other quite compelling segment was performed on a darkened stage, with each of the performers holding a cigarette lighter, which they would light and unlight in different, alternating patterns.

The set, part of which was quite elevated above the stage, was not credited in the program, but is a profusion of dazzling colors and set pieces such as huge steel drums, an assortment of barrels, and other metal or rubber props which are beautifully enhanced by the candy-colored lighting design by Steve McNicolas and Neil Tiplady.

“STOMP” is the quintessential use of the creative force and resulted in an exquisitely controlled stampede of movement, sound, and yes, lots of laughs. This wonderful production is a perfect show for kids so they can experience the magic of creativity and perhaps stimulate their imaginations, which can sometimes be dwarfed by today’s technology. So, the next time “STOMP” comes to town, be sure and pick up tickets for the entire family.