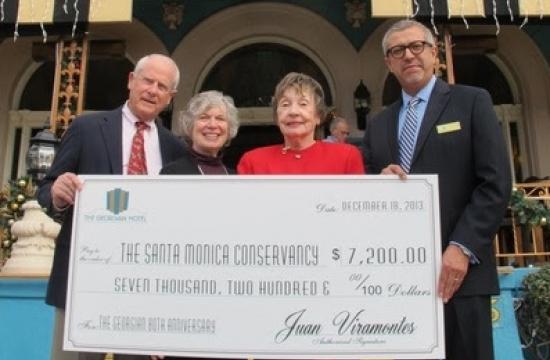 The Georgian Hotel in Santa Monica partnered with the Santa Monica Conservancy for its 80th anniversary celebration in October 2013 to raise $7,200 to benefit the work done by the staff and volunteers of the Santa Monica-based organization.

The landmark hotel held an 80th anniversary gala with 100 percent of the ticket sales benefiting the Santa Monica Conservancy.

In addition to the total funds generated by the event’s ticket sales, the hotel encouraged guests to contribute to the preservation of historic properties in Santa Monica by matching donations through the end of 2013.

Conservancy president Carol Lemlein said she was delighted with the fundraising efforts.

“The Georgian is one of the historic buildings featured in our ongoing Downtown Walking Tour,” Lemlein said. “Hotel leaders have been strong partners to the Conservancy and we are deeply appreciative.”